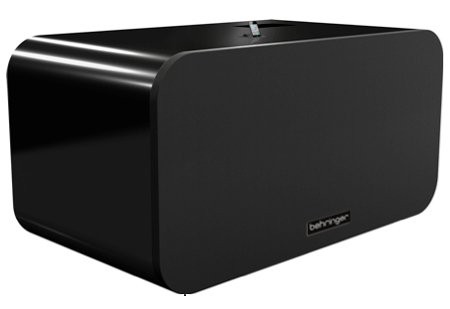 The CES 2012 is all set to play host to the Behringer iNuke Boom, an iPhone and iPod dock that’s stated to deliver an output of over 10,000 Watts. Talk about the loudest Apple iDevice dock we remember hearing of.

Apart from its performance offerings, this device also draws attention towards certain physical specifications in terms of how unexpectedly huge it is. With a height of 4 feet and width measuring at 8 feet, the speaker system weighs more than 700 pounds. In comparison to this, the handset and the music player look pretty small to the eyes when perched upon it.

“When I started Behringer 22 years ago my goal was to provide musicians with high quality equipment at an affordable price,” stated Uli Behringer, founder and CEO of Music Group. “With the launch of Eurosound we are challenging ourselves to share the incredible sound and quality we have worked to so hard to craft over the last two decades with all music and audio enthusiasts.”

The iNuke Boom speaker system is not the only new announcement coming from Behringer. The Eurosound brand under which the dock is categorized, is also equally fresh. The company conveys that all products to feature in this lineup will sport European inspired designs. Four subcategories will further sort these models on the basis of their purpose. Home, Creation, Portable and Live are the main groups which will suggest what target audience every model is aimed at.

The Behringer iNuke Boom price is disclosed as $29,999.99. This iPhone and iPod dock will make its debut next year at the CES 2012. Further details about the release date and availability through retailers have not been revealed as yet.