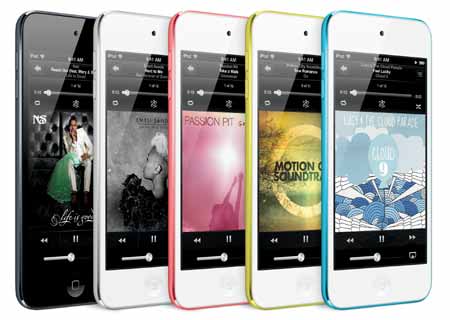 The iPod touch fifth generation from Apple is a lot like the iPhone 4S, not design wise, but based on certain hardware components and features employed. The new music player recently made its debut alongside the iPhone 5, packing in a dual core A5 processor, a larger screen and the virtual assistant Siri.

Being the thinnest device in its series, Apple has dressed it in a lightweight anodized aluminum shell that measures 123.4mm x 58.6mm x 6.1mm in dimensions and weighs 88 grams. A 4-inch IPS Retina display featuring a fingerprint-resistant coating, an 1136 x 640p resolution and a pixel density of 326ppi, is placed on the front along with a 1.2MP FaceTime HD camera that can record videos in 720p HD. The rear is incorporated with a 5MP BSI iSight camera that tags along AF, an LED flash, an f/2.4 aperture and 1080p FHD video recording at 30 fps.

Coming to the activity life, the built-in Li-ion battery is capable of delivering approximately 40 hours of music listening or up to 8 hours of video playback on a single charge which is estimated to take around 2 hours to reach 80% or just about 4 hours to get completely juiced up. Where connectivity is concerned, the redesigned device fits in Bluetooth 4.0, Wi-Fi 802.11a/b/g/n standards, Nike+ support and the new Lightning connector. The new iPod touch will arrive for the first time in a host of shades such as yellow, blue, white and silver as well as black and slate. It even looks pretty in pink.

Siri is no longer an iPhone-specific attribute. When the company announced iOS 6, they also mentioned that it would bring the virtual assistant to the new iPad and at today’s, the iPod touch fifth generation as well. With its arrival on the music player, users will be able to post updates directly to Facebook via verbal commands and even carry out all previously known operations. Additionally, users will have access to a wide catalog of applications, that’s 700,000 according to the company, from the App Store.

The iPod touch fifth generation price in the US amounts to $299 for the 32GB version and $399 for the 64GB variant. The latest music player from Apple will be up for pre-order starting September 14 through the company’s online store, while its release date is slated for October through retail outlets and authorized resellers as well. The fourth generation iPod touch can be currently picked up in shades of black and white at $199 and $249 for the 16GB and 32GB devices, respectively.