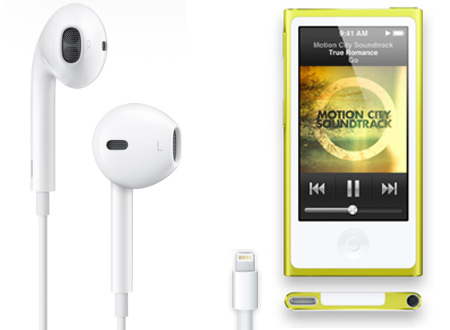 Now that Apple finally got around to launching the iPod nano 7th generation, it’s time to separate fact from fiction. Fact – the device is actually taller than its predecessor. Fiction – Cupertino has added Wi-Fi. So much for that story about a nano with wireless connectivity.

Claiming the title of ‘the thinnest iPod ever,’ the portable player comes fitted with a 2.5-inch multi-touch screen rendering visuals at a 240 x 432p resolution, in 202ppi sharpness. It’s the first time Apple has gone with such a large screen on a nano. Of course, this particular iDevice has seen a lot of radical changes through its entire history. Let’s just pretend it’s that one gadget Cupertino’s design heads like to be very experimental with.

“With over 350 million sold, iPod is the world’s most popular and beloved music player. Music lovers may have a difficult time deciding between the reinvented iPod nano, the thinnest iPod ever, and the all-new iPod touch with its stunning 4-inch Retina display, 5 megapixel iSight camera and ultra-thin design—both in beautiful new colors,” explained Philip Schiller, Apple’s senior vice president of Worldwide Marketing, while talking about the unveiling.

Just like on the new iPod touch and iPhone 5, there’s a Lightning connector on the iPod nano 7th generation too. What’s more, it will let users attach 30-pin peripherals to the iDevice via a Lightning-to-30-pin adapter. This dock connector is not just smaller than the previous one, it’s also crafted to offer more durability. The EarPods will be thrown into the package, though it won’t be the only way to listen to music stored on the gadget.

That’s because Apple has dropped Bluetooth into the mix so that audiophiles can take full advantage of wireless headphones, speakers and more for listening to their favorite tracks. Then there’s FM radio, support for Nike+ and a pedometer to encourage the all too popular combination of music and cardio activities. The in-built battery is expected to deliver up to 30 hours of audio playback or 3.5 hours of video playback. 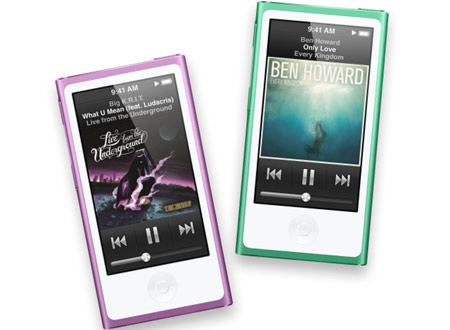 Squeezing itself within dimensions of 3” x 1.5” x 0.2”, the player serves up 16GB of hoarding space. It lands in seven new color options of blue, silver, purple, pink, green, yellow and slate. These hues are complemented by color-matched wallpapers. There’s no concrete word on when fans will get to lay their hands on the device. All we know is that it’s coming sometime in October.

The iPod nano 7th generation price in the US is $149. It will be sold through the Apple website as well as the company’s retail outlets and authorized resellers.