Apple has been busy boasting about how much faster the iPhone XS is compared to the iPhone X and now there’s some real-world evidence of this. It seems the former’s wireless connection speed has improved by up to 266%.

Speed testing service SpeedSmart shared a comparison chart of the iPhone XS, iPhone XS Max, and iPhone X’s LTE speeds on Twitter. It tested each device on three major US carriers namely AT&T, T-Mobile, and Verizon. Interestingly, the newer iPhone shoots past the older one in each evaluation. 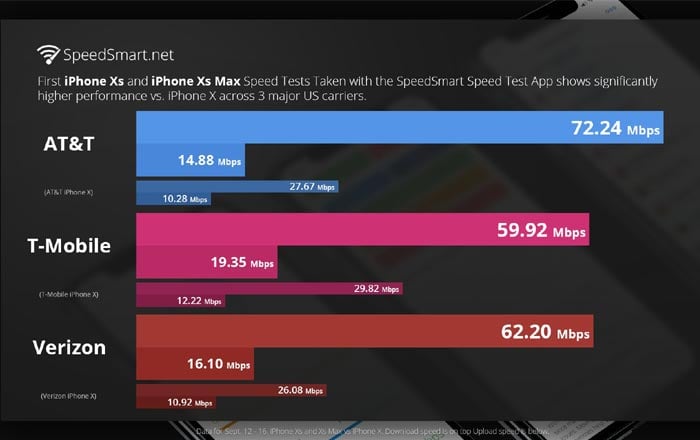 Why iPhone XS Is Faster Than iPhone X

It might seem like Apple has done something revolutionary to bring about this improvement, but in reality it’s just added 4×4 MIMO support to the iPhone XS and iPhone XS Max. The technology has been around in the Android world for a long time now and the Cupertino-based brand is only catching up now.

Besides introducing Gigabit-class LTE 4×4 MIMO, Apple has also brought QAM and LAA technology to the mix. The radio technologies help boost the speed and range of handsets. Unfortunately, the company has chosen not to bundle 4×4 MIMO into the iPhone XR, so it’s stuck on LTE Advanced 2×2 MIMO.

All this might come as a relief to folks who were worried about the Intel XMM 7560 modem chips present in the iPhone XS. Apple hasn’t officially confirmed Intel’s presence, but Qualcomm did admit that its chipsets are not present in this year’s lineup.

Previous iPhones have had a mix of Qualcomm and Intel modems, with many claiming that the former was faster than the latter. Apple reportedly switched to Intel completely in light of the numerous court cases it’s fighting against Qualcomm.