The iPhone XR is Apple’s entry-level iPhone of the year, while the Galaxy Note 9 is Samsung’s most premium flagship. You’d think the latter would soundly beat the former purely based on specs, but you’d be wrong. A new video attempts to see which phone is faster by pitting both against each other in two rounds of speed tests.

PhoneBuff starts out by opening a series of 16 apps using a robot finger including Amazon, Camera, Facebook, Starbucks, Microsoft Excel, and Subway Surfers. The iPhone XR races ahead of the Galaxy Note 9 here, finishing up 15 seconds ahead of its rival. 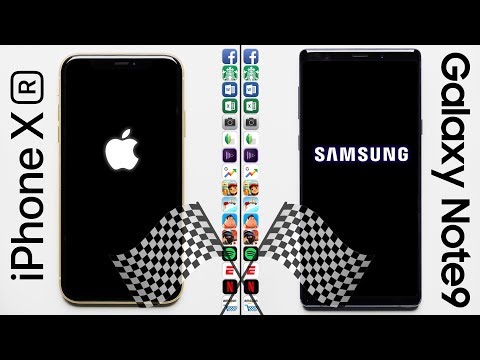 The next round sees the same apps opened again to see how well the smartphones retain these apps in memory. This is where having 8GB of RAM proved to be the Samsung handset’s secret weapon since it was able to open up applications much faster than the 3GB-stuffed iPhone XR.

The iPhone XR managed to complete both rounds in 2:38:33, while the Galaxy Note 9 took 2:38:48 all-in-all. PhoneBuff thus declared it a tie and both are now sitting pretty at the number 3 spot on the channel’s rankings.

The result is fairly impressive for a so-called ‘budget’ phone like the iPhone XR, but the fact that it packs the same 7nm A12 Bionic chip as its premium XS cousins gives it a big advantage over the nearly year-old 10nm Snapdragon 845 SoC. It doesn’t hurt to have Apple’s signature blend of hardware and software either.