The iPhone X comes with IP67 dust and water resistance, meaning it can survive under up to 1m of water for 30 minutes. As it turns out, the smartphone might be capable of lasting a whole lot longer than that.

A man named Dallas recently made an interesting discovery while exploring a river as part of his YouTube channel Man + River. He typically finds lost items like sunglasses and rings, but in one recent video he came across a silver iPhone X at the bottom of a river.

You can see the iPhone X’s screen (or screen protector) is cracked and damaged. There’s a case around it, but the cover isn’t waterproof. All these factors combined should have spelled death for the handset, but it seems Dallas managed to revive it using a combination of silica gel beads and a hairdryer. 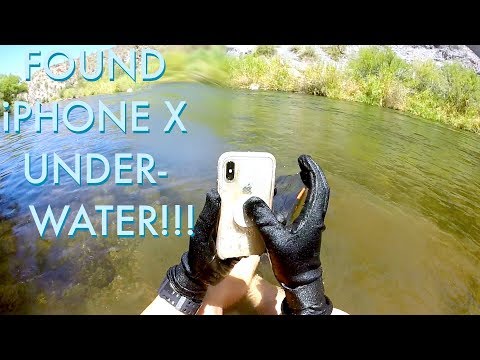 As some have noted, the phone which was rescued had a silver rim and the phone being dried had a black frame. We’re not sure whether it’s the same device as a result. In any case, he plugged in the iPhone X after 3 days and discovered that it worked. There were no cracks on the display at this point, but that might be because of the screen guard.

He then got in touch with the iPhone X’s owner, Alyssa. She told him that she had dropped the handset in the river 2 weeks ago. She had been understandably upset over the accident since she hadn’t taken backups of her newborn baby’s photos.

It’s important to remember that Apple’s warranty doesn’t cover water damage. It would be best not to dunk your iPhone underwater or take it swimming with you just based on this one extreme example.