Further proof of the iPhone X Plus’ existence has just popped up courtesy a recent MacX forum post. The person behind the leak has uploaded photos of the handset’s screen and digitizer, in addition to providing provided some background information on where the images came from.

Apparently, the screen and digitizer originate from a trial run of production equipment at LG’s facilities in Vietnam. This is entirely possible as a new Bloomberg report claims that Apple is in the middle of a test run for the iPhone X Plus, second-gen iPhone X, and 6.1-inch LCD iPhone.

LG is the real surprise here, as Apple has so far relied exclusively on Samsung to make its OLED panels. Rumor has it that the iPhone maker has invested billions into LG Display to jumpstart its production of these displays. If true, this could be our first look at what the collaboration looks like. 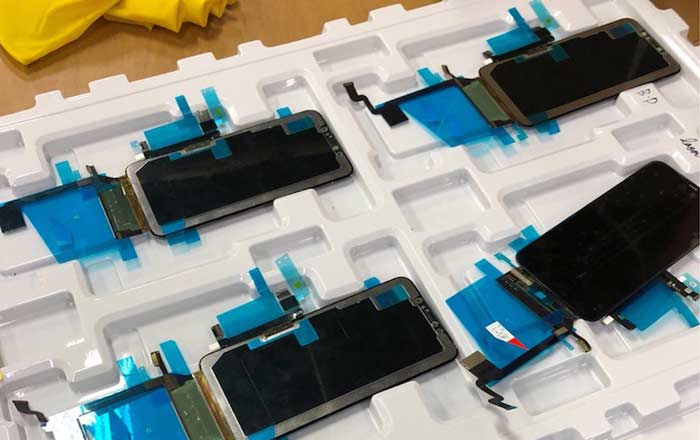 The digitizer above does appear to be much bigger than the current iPhone X based on how it fits in the person’s hands. The notch seems to be bigger as well, although a previous rumor did state that Apple was trying to make the cutout smaller. There’s a flex cable at the bottom which contains a production date in the 46th week of 2017.

Crunching some numbers, that would be the middle portion of November 2017. That’s a long time ago, but MacRumors points out that there could be a lag between digitizer production and the part’s addition into the full display assembly. Making things a bit more authentic is the part number printed on the cable which sticks to the format usually used by Apple.

The leak includes a second image which features a tray consisting of 4 assembled display/digitizer components. The rear design is very similar to the iPhone X’s display assembly, but not identical. It also looks bigger than the same iPhone X part because of the relative size of the small earpiece.