iPhone rumors are starting to pile up, with more and more evidence of a brand new 6.5-inch OLED iPhone X Plus, a budget LCD 6.1-inch iPhone, and a 5.8-inch OLED iPhone X sequel. The first two have now gotten their schematics leaked via Forbes and accessories maker Ghostek.

Based on the diagrams, it seems like the iPhone X Plus will enlist the help of 3 cameras to shoot photos. There have been rumors of a triple-lens iPhone in 2019, but not 2018. Some say the third hole is actually a flash unit, but Forbes disputes that. While the flash hasn’t been depicted in the images, it claims the module will be on the right side of the setup.

The publication also points out that the flash is much smaller than the lenses in past iPhones. Whatever the case, it appears that the iPhone X Plus will be the only one to benefit from having 3 cameras. The standard iPhone X and affordable iPhone are expected to grab dual and single shooters, respectively.

Interestingly, the schematics indicate that the 6.5-inch iPhone X Plus is going to have a smaller footprint than the 5.5-inch iPhone 8 Plus. The former may measure 157.2 x 77.1mm and the latter measures 158.4 x 78.1mm, making it a tad bigger. The new smartphone is expected to be heavier though since it’s swapping steel for aluminum in the chassis. 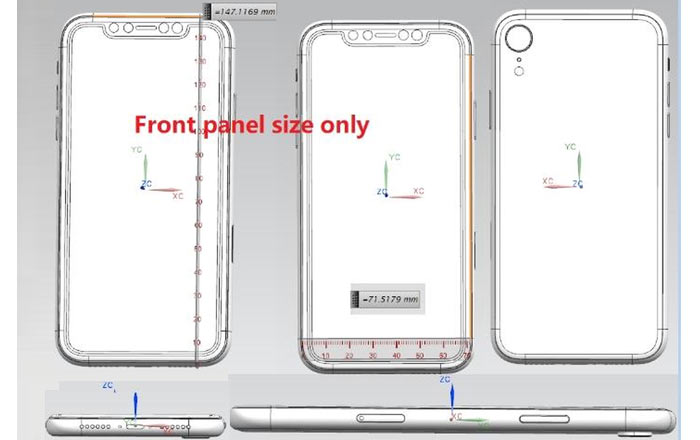 As for the low-cost iPhone, it might feature dimensions of 147.12 x 71.52mm, longer and wider than the first-gen iPhone X. This is to be expected given its 6.1-inch size. Apple is apparently going to ditch 3D Touch, employ a bigger notch, and saddle the device with first generation Face ID tech.

Only the OLED models may get blessed with second-gen Face ID. Like we mentioned before, the LCD iPhone could see a single camera strapped to its back. Apple is said to be slashing prices by $300 this time around, so this year’s crop should prove to be a bit more popular than last year’s.