After a lifetime’s worth of leaks and speculation, Apple’s tenth anniversary iPhone has finally come out in the open alongside 2 other models. The new iPhone X, iPhone 8, and iPhone 8 Plus skip the 7s generation entirely, perhaps to better compete with the Galaxy S8 and Galaxy Note 8.

Just to be clear, the ‘X’ in iPhone X is meant to be pronounced as ten and not the letter x. It’s a clever way to distinguish the handset from the others while still working within Apple’s numerical naming scheme. Consumers probably won’t have a hard time telling the options apart though, since the premium device ditches borders for an almost uninterrupted screen.

Apple’s original iPhone revolutionized the industry when it first came out and the brand’s now attempting to do the same with the iPhone X, dubbing the product the future of the smartphone. Things aren’t quite the same as 2007 though, since several companies like Samsung, LG, Essential and Xiaomi have already leapfrogged ahead of it in the bezel-less phone game.

This makes things a lot more competitive and puts pressure on Apple to come up with something truly compelling. The company’s betting big on the OLED display, claiming that it’s the first OLED panel to rise to the standards of iPhone. This sounds like a subtle dig at Samsung’s expense, which most people will recall is the brand which made the screens in the first place.

Apple’s been working on an all-screen iPhone for 10 years and the result is the iPhone X’s 5.8-inch Super Retina 458ppi 1125 x 2436p display. That’s in addition to a million-to-one contrast ratio, HDR 10 support, and Dolby Vision technology to make sure blacks are truly black and colors look accurately vivid.

The iPad-only True Tone feature has made its way to the iPhone 8, iPhone 8 Plus, and iPhone X as well. The handsets will be able to automatically adjust the white balance according to the color temperature in a person’s environment, reducing strain and making the screen look more natural. 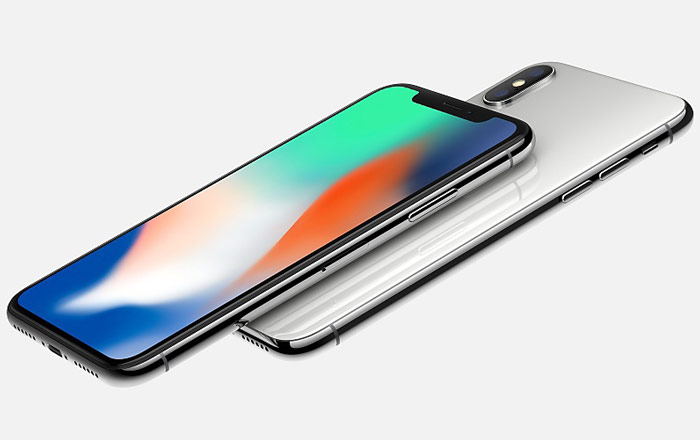 Love it or hate it, the iPhone X has an eye-catching design that will turn heads no matter what feeling it inspires. There’s glass on the front and back which Apple promises is the most durable glass ever in a smartphone, though we’ll have to wait and see whether that holds up in the real world. Holding it all together is a polished surgical-grade stainless steel band.

The iPhone X, iPhone 8, and iPhone 8 Plus boast of IP67 protection against dust and water, the same level as the iPhone 7 but a step below Samsung’s flagships. This means the devices can be submerged under 1m of water for 30 minutes and live to tell the tale. Still, it would be best not to go swimming with it.

Somewhat surprisingly, Apple has decided to launch only 2 iPhone X color options- silver and space gray. Even the iPhone 8 and iPhone 8 Plus will only be available in silver, space grey, and gold. The last comes across as a lighter shade of rose gold, good news for fans of that shade. There’s no black or jet black option to be found, so it looks like the iPhone 7 was the last of its kind.

With the home button gone, there was no place for Touch ID to go. Instead of going with a not-quite-ready under-glass solution, Apple has forged ahead and ditched its fingerprint scanner altogether. iPhone X users will just have to get used to Face ID, the company’s new depth-sensing authentication system for everything from unlocking the smartphone to buying via Apple Pay.

Face ID relies on Apple’s TrueDepth camera system, its fancy new term for some of the sensors residing in the notch above. It consists of a dot projector, infrared camera, and flood illuminator. The first projects 30000 dots onto a face, the second analyses it, and the last beams out infrared light to read a face even in the dark.

Apple’s pretty confident about Face ID, claiming that photos and masks can’t fool it. People will have to actually look at the iPhone X to unlock it, a problem if it’s lying flat on a table at a distance away. Touch ID will be missed in such a scenario. There’s also the twin factor, with Apple acknowledging that identical twins might be able to fool the system. 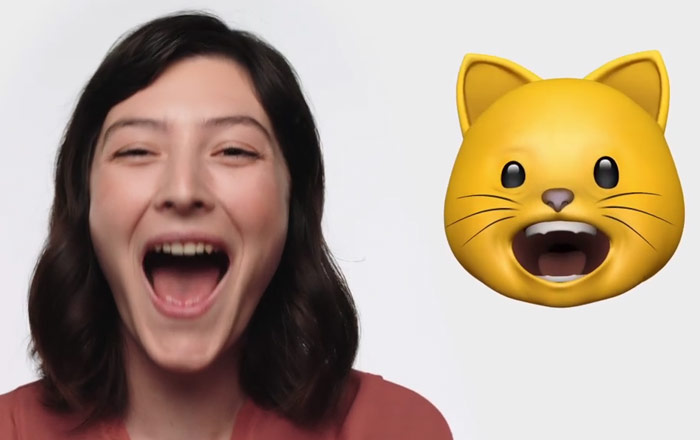 The iPhone X is also catering to fans of emoji by using its TrueDepth camera to bring the little cartoons to life. Dubbed Animoji, the phone will be able to capture an individual’s facial expressions and voice and infuse it with an emoji of their choice. This is a pretty nifty trick which could easily become very popular, capitalizing on the trend of putting filters on a face by taking it a step above.

Another casualty of not having a home button is that Apple had to come up with a new way to lead people back to the home screen, multitask, and summon Siri. A bar at the bottom will have to be swiped up to do the first, the same bar will have to be lifted up slightly to display the last used apps, and the side button now triggers Siri.

The iPhone X has a 12MP f/1.8 wide-angle and 12MP f/2.4 telephoto dual-camera module on its back placed in a vertical fashion, all the better for a user’s augmented reality exploits. Both come packed with OIS for improved low-light snaps, deeper pixels, quicker autofocus in dark conditions, enhanced HDR, and 4K and 1080p slo-mo videos at 60fps and 240fps, respectively.

Apple’s positioned a quad LED True Tone Flash unit in between the lenses to deliver illumination that’s up to two times more uniform. A new Slow Sync tool uses a slow shutter speed with a short strobe pulse to make sure the background is properly exposed and the foreground subject is brighter in dark surroundings.

As mentioned above, the iPhone X has been custom designed with AR in mind. Each 12MP shooter has been blessed with gyroscopes and accelerometers for accurate motion tracking and an advanced image signal processor to perform real-time lighting estimation. The A11 Bionic CPU and GPU takes care of scene recognition, world tracking, and graphics at 60fps. 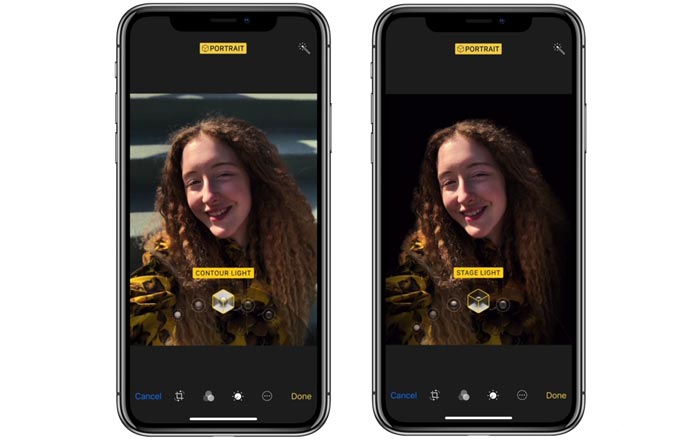 Portrait Mode has now been infused with Portrait Lighting. In addition to artfully blurring out the background, individuals will have the power of professional studio lighting at their fingertips. Options include Contour Light to enhance shadows with highlights and lowlights and Stage Light to spotlight a face against a deep black background.

Portrait Lighting and Portrait Mode have even managed to make its way to the 7MP TrueDepth camera up front. The former is currently in beta, so buyers will have to wait a while before they can test it out. Selfies have long been ignored by Apple, so it’s nice to see that the brand is trying to innovate with the iPhone X.

Apple’s latest A11 Bionic chip is the driving force behind many of the innovations in the iPhone X, iPhone 8, and iPhone 8 Plus. It features a hexa-core structure that consists of 2 performance cores and 4 efficiency cores that are 25% and 70% faster than the A10 Fusion. The handsets are capable of harnessing all 6 at the same time, outputting up to 70% greater performance.

The A11 Bionic’s integrated GPU has 3 cores of its own to deliver 30% faster graphics performance. Even the neural engine has a dual-core design to perform 600 billion operations per second for blisteringly fast real-time machine learning processing. The trio of iPhones needs all the clout it can get since the 3 have to support power-hungry AR apps and 3D games.

One big concern which anyone may have upon going through all these specs is battery power. Apple claims its new CPU ensures that the iPhone X last 2 hours longer than the iPhone 7, a tall claim. The iPhone 8 and iPhone 8 Plus supposedly last for around the same time as its predecessor. 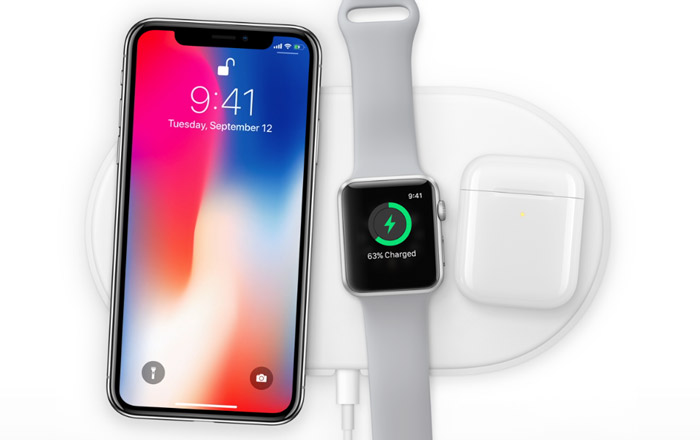 Apple’s finally caught up with its Android rivals when it comes to wireless charging thanks to the introduction of a glass back. All 3 new iPhones will be compatible with the Qi wireless ecosystem, so people can charge their devices in cafes and airports where it’s available.

Belkin and mophie will be selling wireless charging mats via Apple’s site and stores. The company itself will be launching a wireless charging accessory called the AirPower in 2018. The product has enough space to simultaneously charge 3 devices including the new iPhones, Apple Watch Series 3, and AirPods.

Specifications of the iPhone X:

iPhone 8 and iPhone 8 Plus: 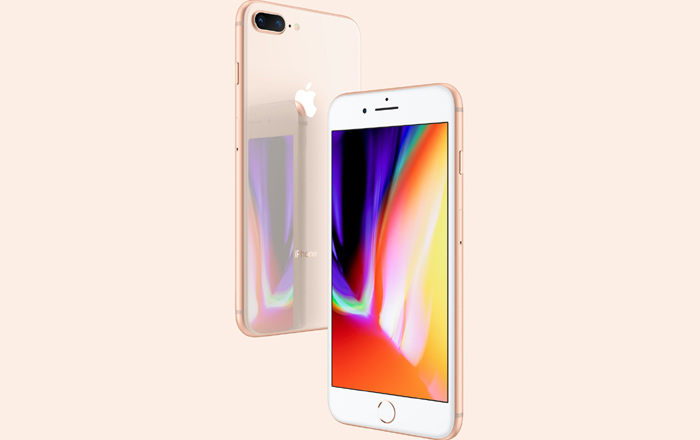 The 4.7-inch iPhone 8 and 5.5-inch iPhone 8 Plus are really the iPhone 7S in all but name. The duo follow the same style pattern established by the iPhone 7, but jazz it up with glass all around. It might serve as a good option for those looking to upgrade from their iPhone 6/6S since it offers a much more powerful A11 Bionic chipset, improved 12MP single/dual cameras, better stereo speakers, and wireless charging.

As predicted, the iPhone X will be heavily delayed. Pre-orders start from October 27 and sales begin from November 3 in the US and India. The smartphone will be available in 64GB and 256GB iterations at $999 or Rs 89000 and $1149 or Rs 102000, respectively. Apple’s taking a big risk making its high-end iPhone so expensive. Only time will tell if the gamble pays off.