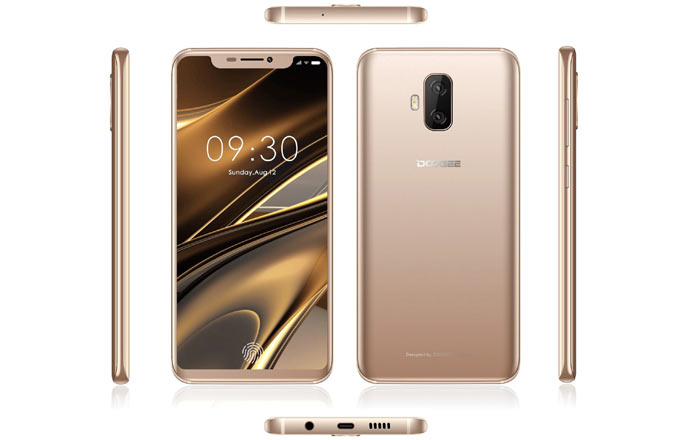 We’ve already seen a pretty accurate clone of the iPhone X doing the rounds in China, but a new handset is set to top that with an even more blatant copy. Not only does the Doogee V take ‘inspiration’ from the iPhone X, it also ‘borrows’ a number of elements from the Galaxy S9+.

Frequent leakster Evan Blass was the first to bring the Doogee V to the world’s attention. He claims it has a 6.2-inch 18:9 screen with an in-display fingerprint scanner. The latter is especially impressive if true since neither Apple nor Samsung was able to pull off such a feat.

Doogee isn’t a well-known name outside China, so it’s doubtful how efficient its scanner will be. Slowness and accuracy is a major issue plaguing such under-screen fingerprint readers. Still, if it does manage to pull it off, the firm can one-up the iPhone X and Galaxy S9 in a single swoop.

The distinctive notch up top betrays the Doogee V’s iPhone aspirations, but it doesn’t look as advanced as the Apple’s TrueDepth camera module. There might some form of Face ID, only instead of 3D scanning it’ll be the ordinary 2D kind.

Doogee’s also blatantly ripped off the Galaxy S9+ in terms of design, right from the narrow curved bezels to the centrally located dual cameras at the back. This is especially insulting to Samsung since the company hasn’t even released the phone officially yet.

Anyone interested in owning this Frankenstein mishmash of Apple and Samsung will have to wait for Doogee to unveil it by the end of April or start of May priced at around $300 to $350. Specs might include 16MP dual selfie cameras, 21MP dual rear snappers, a MediaTek P40 processor, 128GB of ROM, and 6GB of RAM.