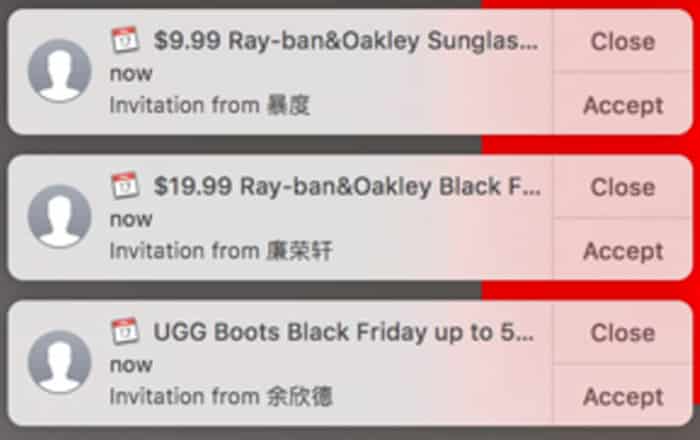 Apple appears to have a serious spam problem when it comes to the way calendar invites work in iCloud. The Calendar app automatically scans a user’s inbox and prompts invitations based on them directly in the form of notifications which users have to decline or accept.

While this has proven to be a very useful feature for legitimate events, it’s a nightmare when invitations come from fraudulent sources. Spammers seem to be taking full advantage of the Apple tool since it’s a more direct way of engaging with people. These annoying prompts could be for anything from fake Chinese Ray Bans to UGG Boots.

Solutions to this consist mostly of workarounds which help stem the flow but don’t quite stop the bleeding entirely. MacSparky recommends a number of steps to do so such as not declining or accepting annoying iPhone invites since opting for either sends a signal to the spammer that you are responding to their email, encouraging them to send more.

The blog also advises iPhone owners to switch to email-only notifications, though they’ll have to sacrifice all calendar invites to make this happen. To get started, they’ll have to sign into their iCloud account, head to Calendar, tap on the gear icon on the lower-left corner, choose Preferences, and hit the Advanced tab.

This is where they’ll find an option to receive event invitations as either in-app notifications or email. Opting for the latter will partially solve the spam dilemma. Apple is hopefully working on some kind of permanent solution to this growing problem before it becomes much worse.