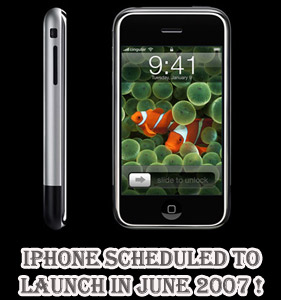 Ever since Steve Jobs delivered his keynote at the Macworld Expo earlier this year in January, it’s become common knowledge that the much-awaited iPhone will make its way into the market sometime in June 2007. But, when exactly it will show up, we don’t really know.

Now, Cingular has confirmed that the iPhone will be released on June 11, 2007. This date happens to be the first day of Apple’s Worldwide Developers Conference in San Francisco from June 11 to June 15.

However, no further information on the much-awaited touch screen phone has been released so far. However, one thing we know is that for those of us in Asia will have to wait longer than the rest of the world, as the iPhone will be launched here only in 2008.

It sure is funny, because the while the entire world awaits the launch of this phone, some guy on eBay was apparently selling a couple of iPhones even though the phone has not been officially launched.

Here is an advertisement on the iPhone that was aired at the Oscars. And here, is another commercial that was made for the Japanese market. It’s way cooler than the first ad, and very well demonstrates the iPhone’s touchscreen.