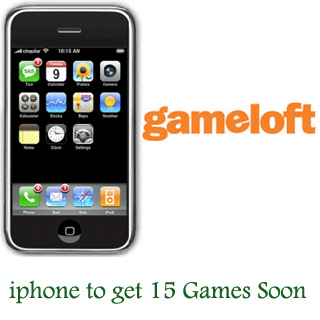 Mobile phone games developer and publisher Gameloft has announced that they are in the works of developing over 15 mobile game titles for Apple’s iPhone. The forthcoming games would be built on the recently introduced iPhone Software Development Kit (SDK). It features third party application, which can be downloaded onto the handset via Wi-Fi or EDGE. Meanwhile, Gameloft has already kicked off the development of the titles.

Michel Guillemot, President of Gameloft stated, “The iPhone gaming environment opens a new era in mobile gaming and is exactly what we’ve been waiting for. The Apple iPhone has changed the way consumers perceive and interact with their mobile phones, and the release of the SDK is a tremendous opportunity for Gameloft to apply its creative and innovative approach to mobile gaming.”

“Due to our investment in creating one of the most advanced and creative development studios to date, we are ideally positioned today to seamlessly integrate new opportunities and quickly produce games that are as evolutionary as they are enjoyable,” added Guillemot.

Expected to roll out in June 2008, the games will be available through Apple’s store for download or purchase.