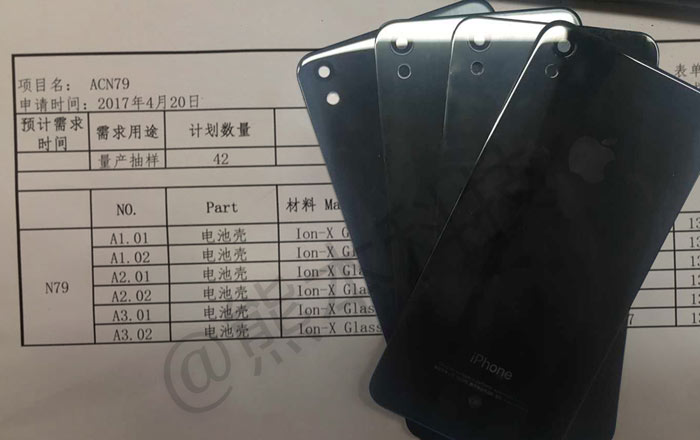 The iPhone SE may finally be getting a successor if a recent Weibo post is taken at face value. The leak features an image of four back shells said to be that of the second generation of the handset.

At first glance, the alleged iPhone SE (2017) shells look fairly authentic, complete with an Apple logo and iPhone signature. The biggest change appears to be the material since it’s clearly glass rather than the metal found in the original.

The sheet of paper below the parts reveals that Apple might be utilizing Ion-X glass for the iPhone SE (2017). Coincidentally, the same substance was used for the Apple Watch Sport. This particular type of glass isn’t as resistant to scratches as the sapphire one found on the higher-end models.

The other major change which stands out is the camera setup. The first iPhone SE had a conventional horizontal placement like all other iPhones in the past. However, the second one could adopt a vertical placement where the LED flash unit sits below the lens.

Interestingly enough, the upcoming iPhone 8 is expected to feature a vertical dual lens configuration with the LED flash unit placed in between. This has lead some reports to allege that the back seen above is actually for the iPhone 7s.

The iPhone 7s is predicted to look similar to its previous variant but with a glass back to allow for wireless charging. Moreover, the panels in the leak lean more towards an iPhone 7-esque design rather than the iPhone 5S one the original iPhone SE resembled.

The iPhone SE (2017), if it does exist, is expected to be announced on June 5 during Apple’s keynote address at the WWDC 2017. Stay tuned for more on the smartphone till then.