iPhone is the Leading Device for Internet Access, says Survey 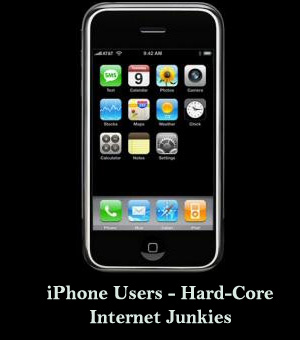 A new survey conducted from M:Metrics has revealed that a huge portion of iPhone users, as much as 85% regularly browse the internet from their iPhones. According to the survey, as compared to any other smartphone, Apple’s iPhone is used on the largest scale for browsing the internet.

The patterns of over 10,000 adults in the US were analyzed for a period of six months; post the iPhone’s debut in the US.

Mark Donovan, senior analyst, M:Metrics said, “While the demographics of iPhone users are very similar to all smartphone owners, the iPhone is outpacing other smartphones in driving mobile content consumption by a significant margin.”

It’s important to note that while there are 58% of total smartphone owners and 13% of mobile phone users browsing the internet from the handset; 85% of iPhone users use the device for their internet activities, clearly showing the significance of the device amongst the phone browsing circuit.

While 59% of iPhone users regularly visited a search engine, only 37% of smartphone users, and 6% of regular mobile phone users were noticed doing the same.

Two of the key reasons behind the popularity of the iPhone as an internet browsing device are firstly the fact that it incorporates a simple Safari browse and secondly it bundles unlimited data plans offered from AT&T for iPhone users.

Speaking about this, Donova said, “In addition to the attributes of the device itself, another important factor to consider is the fact that all iPhones on AT&T are attached to an unlimited data plan. Our data shows that once the fear of surprise data charges is eliminated, mobile content consumption increases dramatically, regardless of device.”

Furthermore, while a huge 30.9% of iPhone owners used their Apple device to watch TV and/or video, only 14.2% did the same on their smartphone, as compared with a 4.6% market average.