The iPhone FPS games we’ve lined up for you bring unforgiving action to the portable platform. You can expect to plunge into a war-torn zone and indulge in intense combat situations directly via your Apple handset. You will have to deal with relentless foes that definitely won’t go easy on you, no matter what. Taking a cue from that, you too should be armed and ready to take on the evil forces with a brave face and oodles of determination. So crack those knuckles and prepare to enter into battle. 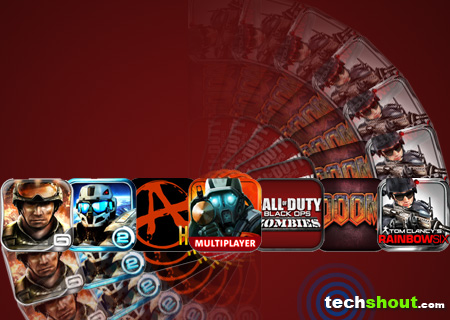 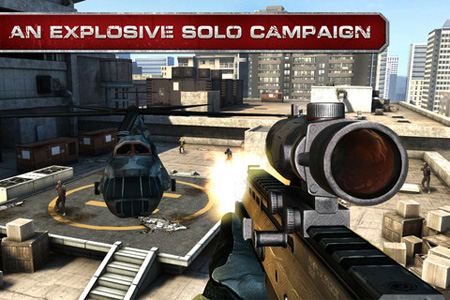 An apocalyptic battle is waging for the freedom of the U.S. in the Modern Combat 3: Fallen Nation title. There is a 13-mission campaign embedded into the game, which will take you to various places around the world such as Pakistan, Middle East, Alaska and Los Angeles. Brace yourself for intense action as you dive into the different types of gameplay like helicopter, destroy 4×4 chase and escort.

You can further enter into battlefield that is fashioned to accommodate up to 12 players. These scenarios span across 6 exclusive maps and boast of incorporating 7 different modes. And if you liked Modern Combat 2: Black Pegasus which released a couple of years back, you would definitely want to feast your eyes on its sequel. 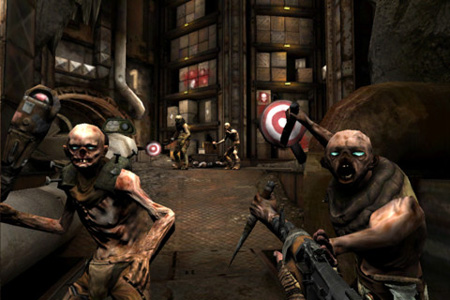 Our array of FPS games also welcomes the intense first-person rail shooter title dubbed Rage HD. The offering certainly needs no introduction especially for those who are ardent fans of this genre. The title pulls you into a post-apocalyptic world where you must wander through dangerous levels in search for ammo and cash pick-ups. But don’t let your guard down even for a second as there are hungry mutants lurking at every nook and corner, waiting for fresh meat and that means you. 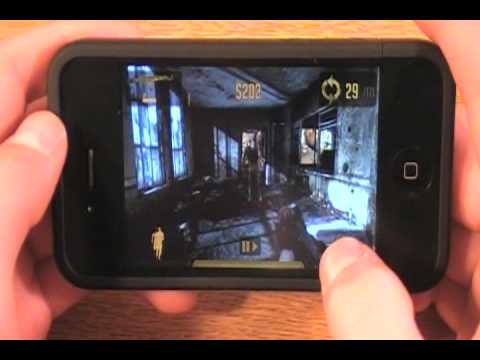 The trio of levels includes an abandoned bunker, tenements and an asylum with lunatics running amok. Each packed with four degrees of difficulty, you can perform hit-streaks and even acquire ‘Bash Bux’ for enhancing your overall performance. Aiding you in your quest are different weapons like shotgun, pistol and machine gun. 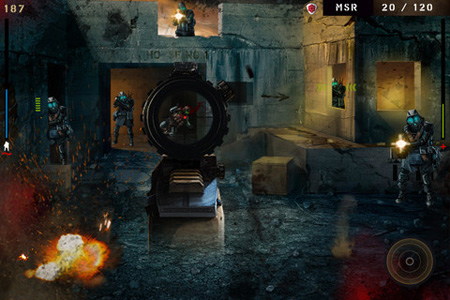 Now if you’re wondering whether Apple iTunes has any FPS titles that can be procured absolutely free of cost, well then the answer is a definite yes. Overkill drops in with two tiers of gameplay namely Novice and Elite. And as the individual names aptly suggest, these segments cater to both beginners as well as hard-core gamers, respectively. While the former features slower-paced foes that can be killed by delivering relatively fewer shots, the latter comprises of enemies that are quicker and harder to eliminate. You can upgrade your weaponry and create loads of combinations from a wide spread sheet that includes the likes of AK-47, MAG, machine gun, MARV, TECH III and XM8, among others. Accompanying the chaos that’s bound to ensue are high-definition graphics as well as music and sound effects to match the mode along with lots of explosions and blood spewing everywhere. Arm yourself with a good amalgamation or arsenal and get ready for panic and mayhem. 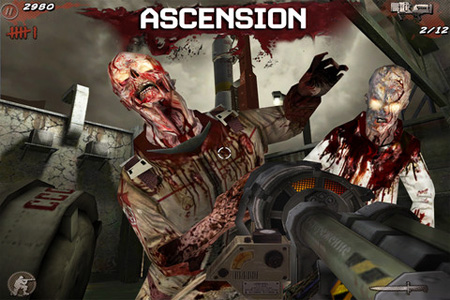 The renowned COD series invades our list of FPS games by bringing forth Call of Duty: Black Ops Zombies. You can annihilate those mindless menaces either alone or by joining forces with up to 4 players. There are 50 levels of Dead-Ops Arcade fun up for grabs. This offering is looked upon as a 50-level zombie gauntlet, which is infested with the undead who reek of blood, gore and foul odor. They will stop at nothing to get their creepy hands all over you.

In the Ascension zombie map, you will come face to face with flesh-eating Soviet Zombies and ferocious zombie monkeys. But fear not, as you’ll be armed with formidable weapons such as a Gersh Device, Thunder Gun, Sickle and Matroyshka dolls to deal with the madness that awaits you. 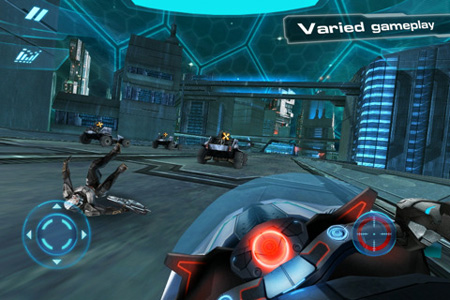 N.O.V.A. 2 – Near Orbit Vanguard Alliance is a sci-fi FPS where players must master a wide selection of powers and weapons in order to survive the whole ordeal. You will also be able to get into the cockpit of a giant mech, blast a laser and drive a motorbike, all via the means of your phone. To further spice up gameplay, there are 10 multiplayer maps which allow you to take on each area with up to 10 players. You can take advantage of 5 modes in this segment namely, Team Deathmatch, Freeze Tag, Free for All, Capture the Flag and InstaGib. 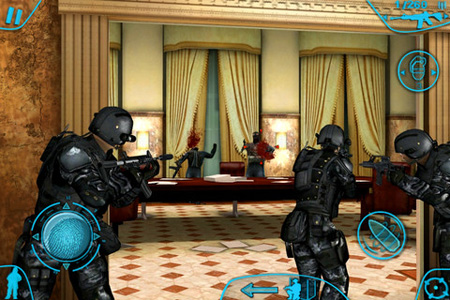 The next entrant in our lineup of FPS games is Tom Clancy’s Rainbow Six: Shadow Vanguard. It touts to provide a new first-person shooter experience and even enables you to lead a team of elite soldiers into the danger zone. You will have to play through 11 missions that require you to eliminate a dreaded terrorist organization. The different situations you’ll be faced with include an oil platform assault, the embassy hostage crisis and infiltration of a rebel camp in Africa. Through local and online co-op modes, you can dish some more pain by taking along up to 2 pals. There are also 5 exclusive maps in the multiplayer mode that can handle up to 10 players. By employing state-of-the-art gadgets, silencers, snake cameras and other covert tools, you can successfully sneak up on the enemy and take out the whole organization with stealth and bravery. 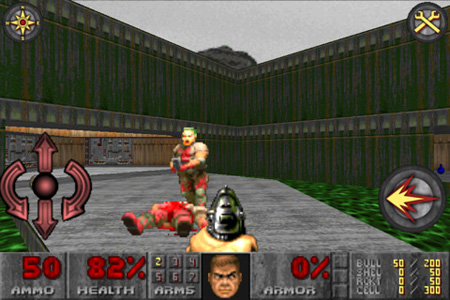 What’s the first name that pops into your head when you think about retro FPS games? Well, for many it most certainly will be Doom, the title that popularized the genre back in the early 90’s. Returning to our roots, it is only fitting that the Doom Classic game be included among the other well-known FPS titles here. Bound to serve up a dollop of nostalgia, the game comes to the iPhone embedded with the original three episodes namely Shores of Hell, Knee-Deep in the Dead and Inferno as well as a fourth one which is christened Thy Flesh Consumed. 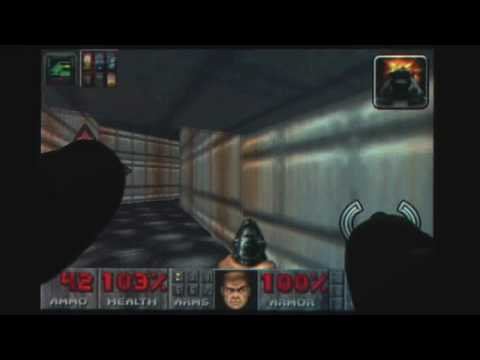 All the 36 missions of carnage and bloodshed are accompanied by the original eerie soundtrack and classic graphics. With a trio of control types at your disposal, you can also avail of a customizable game interface.

No need to feed money into arcade machines or even buy a console, for all your favorite FPS titles are available right at your fingertips. And by opting for any one of the inclusions featured in our iPhone FPS games roster, you can expect to be endowed with great action spread across realistic combat arenas. Which of the aforementioned ones did you try on for size and what are your thoughts on the same?