This iPhone case is actually a full-blown Android phone

We’ve seen examples of people getting Android to run on an iPhone before, a herculean task given how restrictive Apple’s iOS software can be. A startup called Esti Inc has now come up with a bizarre way to combine the best of both worlds by simply strapping a fully-functioning Android phone to the back of an iPhone.

Dubbed the Eye, Esti’s iPhone case makes switching between Android and iOS as simple as turning the handset around. While the concept may sound strange, the product’s Kickstarter page has already gotten over $200000 out of its $95000 goal. That’s a hit by all standards, indicating there’s a market out there of people wanting to transform their iPhone into two phones.

The Eye cleverly takes advantage of the iPhone’s rear camera to make it the Android device’s selfie shooter. The two also share the same speaker and microphone. In good news for iPhone 7 owners, the cover features a headphone jack of its own, so they can listen to music without having to hunt for an adapter.

Esti also claims to have integrated wireless charging into its case, something sorely missed in Apple’s line of handsets. A 2800mAh battery powers the Android side of things while also fueling up the iPhone. The accessory even adds two SIM card slots to the mix.

In terms of specs, backers will be getting a 5-inch AMOLED display, Android 7.1 Nougat, 3GB of RAM, 16GB of ROM, up to 256GB of expandable memory via a microSD card, NFC support, Bluetooth 4.2, Wi-Fiac, GPS, an IR blaster, and a MediaTek Helio P20 processor.

The Eye’s price tag starts at $95 and goes up to $149 for early birds. It’s supposed to begin shipping by August or September this year. You can check it out via its Kickstarter page. 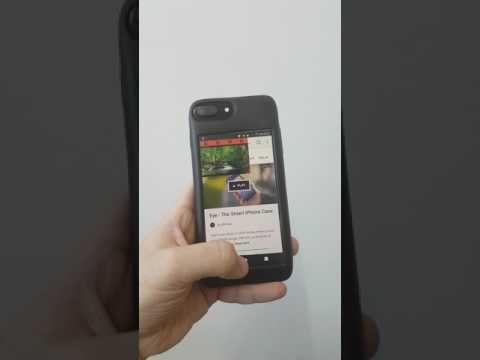