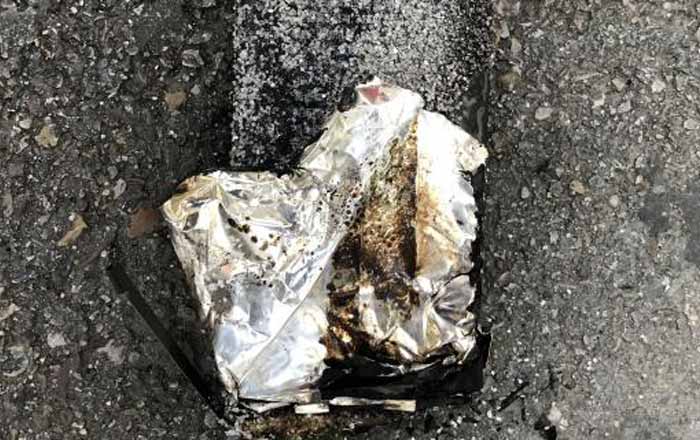 Apple’s reputation is already in the toilet when it comes to batteries thanks to the great throttling debacle. As if things weren’t bad enough, now one of its iPhone batteries has exploded.

To make matters worse, the battery exploded in a Zurich Apple Store and caused the entire outlet to be evacuated. It seems a store assistant was removing the battery from an iPhone 6S Plus when it overheated and burnt his hand. It then began emitting smoke, prompting the staff to throw quartz sand on it to contain the smoke and allow it to be ventilated.

You can see the corpse of the melted and charred battery above with the quartz sand on top. Meanwhile, about 50 employees and customers were ushered out of the Apple Store. Police, fire services, and an ambulance were called in to investigate and tend to victims.

Also Read: iPhone 8 swelling battery issue pops up in the US

6 people apparently received medical care at the site, likely for smoke inhalation. None of them needed to go to the hospital though. The battery and iPhone 6S Plus are currently being examined by the Zurich Forensic Institute to find out why the unit erupted.

It’s not clear whether this battery was being replaced as part of Apple’s battery swap program. The company was forced to discount its powerhouses after it confessed to slowing down iPhones because of reduced battery capacity. Some of have called into question whether the explosive unit was a genuine Apple part or a third-party one.

Apple hasn’t officially commented on the matter yet. The iPhone 6S‘ battery was at the center of a big controversy last year since it was causing unexpected shutdowns, leading the brand to launch a repair program and releasing throttling iOS software.