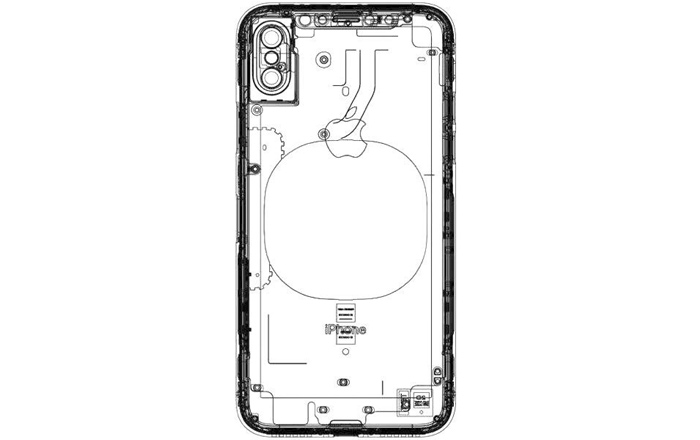 Yet another iPhone 8 schematic has popped up online, the latest in what is becoming a series of blueprint leaks. Somewhat unusually, several prominent tipsters like Benjamin Geskin and OnLeaks have tweeted the image at around the same time period.

The actual source of the image remains unknown, bringing its authenticity under question. Still, it does fall in line with earlier leaks which hinted that the iPhone 8 would carry a pair of dual cameras and no fingerprint scanner on its rear. The most interesting thing about the photo is probably the large circular portion smack dab in the middle.

Several people have suggested that the circular area could be related to wireless charging. Interestingly, Geskin had previously tweeted that the iPhone might boast of long-range cable-less charging extending up to 5m. This has been rumored before, so there may be a grain of truth to his assertions.

However, a research note by Timothy Arcuri from Cowen and Company had debunked this theory a few months ago, stating that Apple was ditching long-range wireless charging since the technology behind it hasn’t gotten full approval from the FCC yet. Qi and AirFuel are apparently more likely candidates.

Geskin also recently claimed that that the iPhone 8 could be bundled with a USB-C to Lightning Cable. The 12.9-inch iPad Pro does in fact carry such a cable, so there is a chance Apple will pass on the benefits of fast charging and USB 3.0 speeds to its OLED iPhone.

Of course, the downside to this is that people will have to adjust to not being able to plug in their iPhone 8 to a USB-A slot. Apple’s 2016 MacBook Pro notably has only USB-C Thunderbolt 3 ports, so it’s not exactly shy when it comes to removing USB-A slots and making people use adapters.