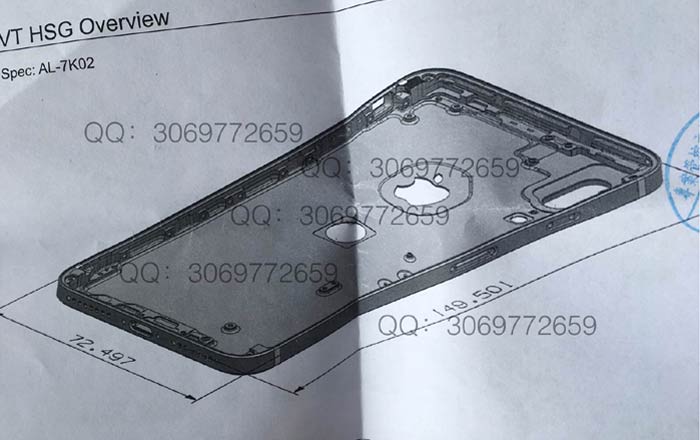 Apple is rumored to be testing multiple prototypes of the iPhone 8 right now, some of which feature Touch ID on the front and some on the back. It’s apparently trying to overcome problems with the former and could be forced to opt for the latter if it doesn’t succeed.

Frequent tipster Sonny Dickson has now provided evidence for the rear-facing fingerprint sensor via an alleged design schematic of the iPhone 8. The handset in the image features vertical dual cameras and what appears to be a cutout for Touch ID on the back.

The positioning of the fingerprint reader below the Apple logo is pretty awkward. It’s already inspired an outpouring of extremely negative reactions online, with many pointing out that it’s not a convenient spot to place a finger on.

Also See: Apple to kickstart trial assembly of iPhones in India next month

MacRumors posits that the circular cutout could actually be for wireless charging, allowing the iPhone 8 to get fueled up without interference from the aluminum casing. It’s widely believed that all 3 new iPhones will support the feature, but it’s not clear if Apple will go with an all-metal body or wireless-friendly glass sandwich design.

Bloomberg had previously reported that Apple was considering a simpler iPhone 8 style that would feature an aluminum back and slightly larger dimensions. The above photo falls in line with that thanks to its 149.5mm x 72.5mm size, which also coincidentally matches that of another design schematic leaked last week.

In a tweet, Dickson pointed out that the iPhone 8 schematic he leaked doesn’t appear to have volume buttons, but this can’t be said for sure until clearer photos turn up. The mute switch, Lightning port, speaker grilles, and SIM card slot are all in place, with the long-lost 3.5mm headphone jack being the only other part missing.