iPhone 8 Plus, iPhone 7 Plus go head-to-head in new drop test

We’ve already seen the iPhone 8 put through a bend, burn and scratch test and live to tell the tale, and now a new video shows how the Plus model holds up when dropped from a height. That’s probably one of the biggest concerns anyone would have when buying the handset since it’s got glass on the front and back, leading to twice the risk.

Apple itself tried to reassure everyone by boasting that the iPhone 8 duo and iPhone X had the most durable glass ever on a smartphone. EverythingApplePro chose to put this to the test by pitting the iPhone 8 Plus against the iPhone 7 Plus. He noted that the former’s glass back had a better grip than the latter’s smooth metal one, so there’s less of a risk of it slipping out of your hand.

He started out with a simple 3 feet drop on the back, a common height for smartphone falls. The iPhone 8 Plus emerged unscathed, but the iPhone 7 Plus’ display surprisingly shattered upon impact. That’s pretty disappointing considering this was just the first evaluation. He then moved on to dropping the two on their side and front. 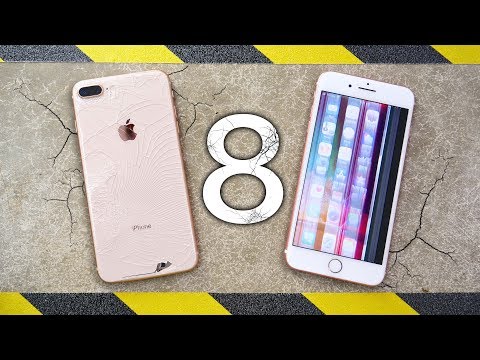 Both iPhones suffered minor scuffs and dents on the aluminum bands in the first, but were alright in the second. EverythingApplePro proceeded to take things up a notch by dropping the handsets about head high at 5.5 feet. The tables turned in this test, with the iPhone 7 Plus’ aluminum back doing pretty well for itself and the iPhone 8 Plus’ rear shattering completely.

The YouTuber noted that the cracks were completely smooth though, so the iPhone 8 Plus would still be usable. Things got worse in the side evaluation because a portion of the device’s back flew out revealing its internals. The front test proved to be its savior though, since the panel didn’t break but the phone itself started separating slightly at the bottom.

The iPhone 7 Plus’ screen didn’t fall apart either, but it became completely unusable with weird lines and glitches. Finally, the pair were plummeted from a height of 10 feet face down. Unsurprisingly, both displays cracked and became unusable for the most part.

In conclusion, it seems the iPhone 8 Plus will be able to withstand everyday drops, but it’s not as durable as Apple says it is. Investing in a case might be a good idea if you’re prone to dropping devices at great heights.