The iPhone 8 has become the subject of a flood of new leaks, offering some interesting information about where Apple plans to place its Touch ID sensor. The overall consensus appears to be that the company is testing two prototypes, one with the fingerprint scanner on the front and the other on the back.

Offering evidence for the twin prototype theory is iDrop News, with the publication citing a Foxconn employee as a source. According to him, one iPhone 8 model currently being tested sports Touch ID on the front underneath the display, 4mm bezels running along the edge, and 2.5D contoured glass on the front and back held together by a metal frame.

The insider also hints that the iPhone 8 features wireless charging, a 5.8-inch OLED screen, the same dimensions as the iPhone 7, an invisible selfie camera hidden underneath the panel, and a big power button with two points of contact. Most of these have been rumored before, with the notable exception of the last one.

The other possibility comes via a Weibo leak of the iPhone 8’s technical schematics. The image depicts the fingerprint reader on the back below the Apple logo, similar to a previous iDrop News report. The handset is apparently still in the early stages of testing, meaning it isn’t final yet. 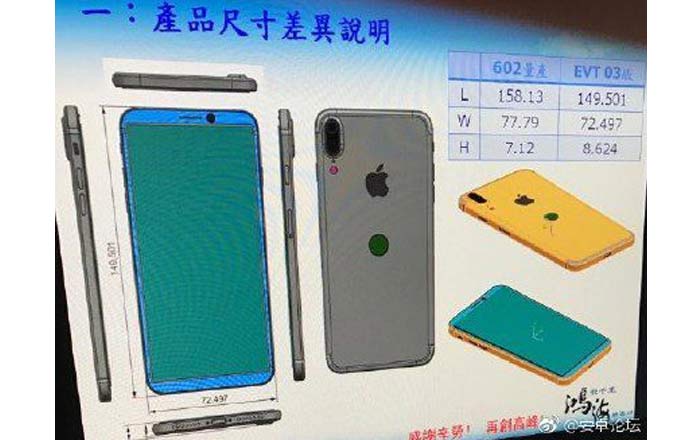 In a separate note obtained by AppleInsider, Cowen and Company analyst Timothy Arcuri claims that Apple’s biggest bottleneck in manufacturing the iPhone 8 is integrating Touch ID underneath the screen. The yield rate of the brand’s own AuthenTec solution is supposedly very low.

Arcuri thinks there are 3 possible solutions if Apple can’t manage to turn things around. The first would involve getting rid of fingerprint recognition and adopting only facial recognition, the second pushing the unit to the back, and the third delaying production of the iPhone but announcing it alongside the iPhone 7s and iPhone 7s Plus.

Arcuri’s research also turned up in another MacRumors report. The analyst believes that Apple will stuff all 3 new iPhones with 3GB of RAM. The iPhone 7s and iPhone 7s Plus are apparently going to be sold in the same regular 32/128/256GB models, but the iPhone 8 may be available only in 64GB and 256GB options.

Interestingly, he also predicts that the iPhone 8 will feature two packs of batteries for extended battery life. Previous speculation has hinted towards a 2700mAh unit in an L shape to accommodate the new stacked logic board design.