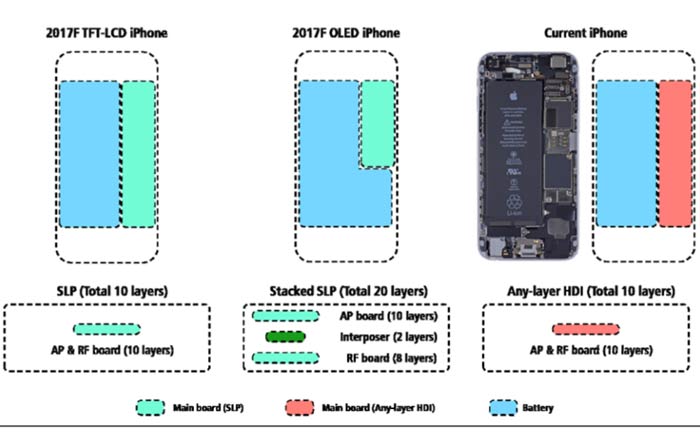 Renowned Apple tipster Ming-Chi Kuo has issued a brand new report on the brand’s next series of iPhones. According to him, the company plans to stuff the high-end iPhone 8 with a 2700mAh battery while maintaining the same overall footprint as the iPhone 7.

The claim serves to add fuel to rumors that the OLED iPhone 8 will measure 5.5-inch and feature minimum bezels, since there’s no other way the handset could maintain the same dimensions as the 4.7-inch iPhone 7. The latter notably bears a significantly smaller 1960mAh battery, while its Plus variant carries a 2900mAh one.

The LCD iPhone 7s and iPhone 7s Plus are both probably going to stick to roughly the same capacities. The iPhone 8’s 2700mAh component is likely necessary to power the expanded screen without a significant loss in battery life compared to the others. There’s a chance the unit might in fact result in a longer battery life.

The report also includes a diagram to explain how Apple managed to fit a bigger powerhouse within the same size. The company is apparently using a stacked substrate-like PCB mainboard to accommodate the bigger unit. The new tech has supposedly resulted in an up to 80% increase in manufacturing costs.

The rise falls in line with previous rumors which alleged that the iPhone 8 would cost higher than $1000. In related news, the brand has joined the Wireless Power Consortium and inked a deal worth $4.3 billion with Samsung Display. The former strengthens talk of a wireless iPhone and the latter is for 60 million OLED panels.