iPhone 8 to get bundled with AirPods, blast water out through sound

The iPhone 8’s apparently got some interesting new features related to sound and waterproofing as per a newly surfaced patent and JPMorgan report. The handset might be able to reject water by blasting it out of the speakers using an audio pulse.

Apple’s patent adopts a two-step approach to stop water from getting in through the speaker grilles. Firstly, a hydrophobic coating has to be applied inside and out to repel water. Secondly, a sensor would have to be placed inside the acoustic chamber to detect the presence of liquid.

Once the water has been identified, a specially designed speaker will then blast out an audio pulse which can’t be heard by the human ear. The liquid will essentially be spit out. Interestingly enough, Apple uses a similar method to get unwanted water out of the Apple Watch Series 2, making the likelihood of it appearing in the iPhone 8 greater.

The JPMorgan note (via MacRumors) also touches on waterproofing techniques, but concentrates on the earpiece receiver, the narrow slit seen above an iPhone’s display. The part has been doing double duty as a second speaker in the iPhone 7. For the iPhone 8, Apple may make it resistant to water and output better stereo sound.

The analysts behind these claims also say that Apple will bundle a free pair of AirPods with the iPhone 8. This seems a bit unrealistic at first, especially given how expensive it is and how the brand is struggling to fulfill current demand for the accessory, let alone the millions including it in the box will require. 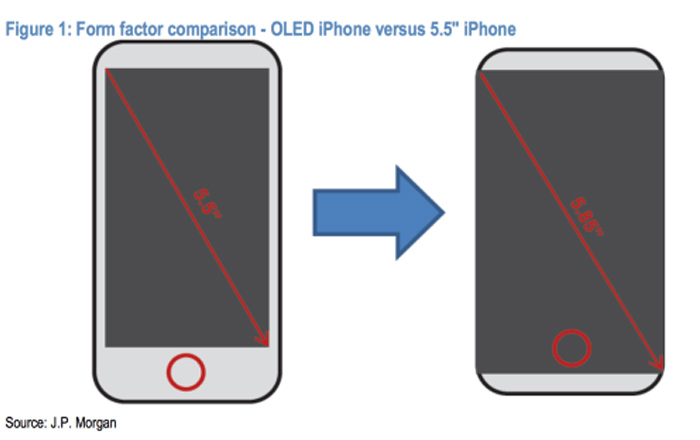 The strongest argument in the AirPods’ favor is that the $1000+ cost of the iPhone 8 will warrant the inclusion rather than the ordinary EarPods the company usually includes. The report also believes that the handset will boast of a bigger battery, 3D sensing module for facial recognition, and an edge-to-edge 5.85-inch display that stretches left to right but leaves out bezels at the bottom and top (see above).

The last looks very similar to the Galaxy S8 and nothing like the leaks we’ve seen so far. JPMorgan predictions can be hit-and-miss though, so we’ll have to wait for more evidence to see if there’s a grain of truth to its beliefs.