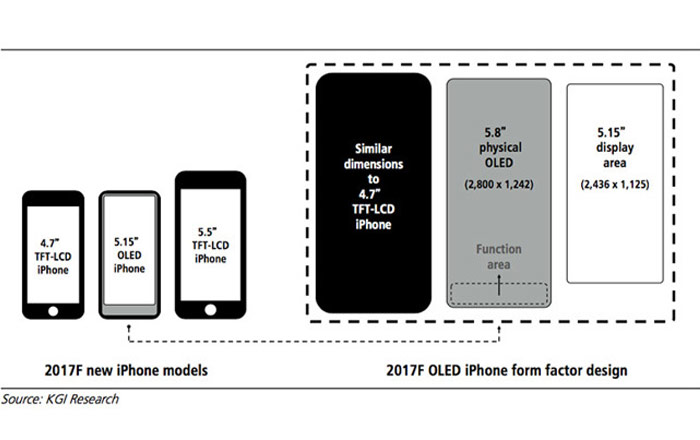 The OLED iPhone 8 is broadly predicted to feature a full-face look which banishes the classic physical home button. A new report by KGI analyst Ming-Chi Kuo has now shed some more light on how exactly Apple plans to go about doing this.

As illustrated by the diagram above, the iPhone 8 is apparently going to measure 5.8-inch overall with a 2800 x 1242p resolution. However, the actual display area may measure 5.15-inch and output a 2436 x 1125p resolution.

Apple is supposedly going to take advantage of the leftover real estate at the bottom by introducing a brand new ‘function area’ which will play host to virtual buttons. Kuo didn’t elaborate on what keys will be accessible in the section. It’ll likely consist of a set of always-on system controls.

His note doesn’t specify whether the function area will disappear when playing games or watching a video. This isn’t the first time talk of virtual buttons has appeared. Some say that Apple plans to get rid of all physical keys, even the ones on the side of the iPhone 8.

Kuo’s report went on to speculate that the company would utilize bio-recognition assets to handle security. His predictions are in line with earlier talk of Apple integrating a 3D laser scanning module to make facial recognition and AR support possible.

Finally, Kuo believes that the iPhone 8 will be priced starting at $1000. The bump up is the result of a 50% to 60% rise in production costs in comparison to the LCD iPhone 7s.