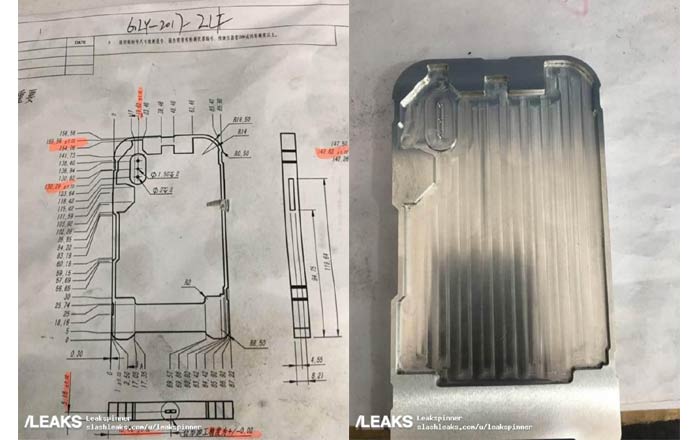 Yet another iPhone 8 diagram has surfaced online, this time accompanied by 2 pictures of CNC molds matching the schematic’s design. Apple is believed to be deep into testing several prototypes of the handset right now.

It’s beginning to look more and more likely that Apple’s going to keep Touch ID underneath the display rather than on the back. That’s certainly what the blueprint suggests, since it only features cut-outs for the power button, Lightning port, and vertical dual cameras.

It’s unclear which stage of production the photos come from, so the diagram can’t be taken as 100% certain. Based on the snaps, it seems the iPhone 8 will sport a prominent camera hump since a dent can be clearly seen. Previous rumors have indicated that the company is opting for a vertical format in order to enhance the handset’s VR or AR skills.

The schematic is one of many frequent leakster Benjamin Geskin has posted to Twitter, crediting Slashleaks as the source behind the most recent images. The drawings mostly have one prominent feature in common, a circular portion right at the center.

While the mysterious circle doesn’t appear in the above picture, its appearance in the others has lead many to predict that Apple is working on including Qi wireless charging. The brand already uses a variant of the latter’s inductive charging technology for the Apple Watch.

Analysts are another constant presence in iPhone 8 rumors, hinting at a super cycle that will be triggered by pent up demand from users who haven’t upgraded their iPhone model in a while. Credit Suisse analyst Kulbinder Garcha is now joining this chorus, claiming that Apple will see strong growth based on the iPhone 8 and a strong shift towards services.