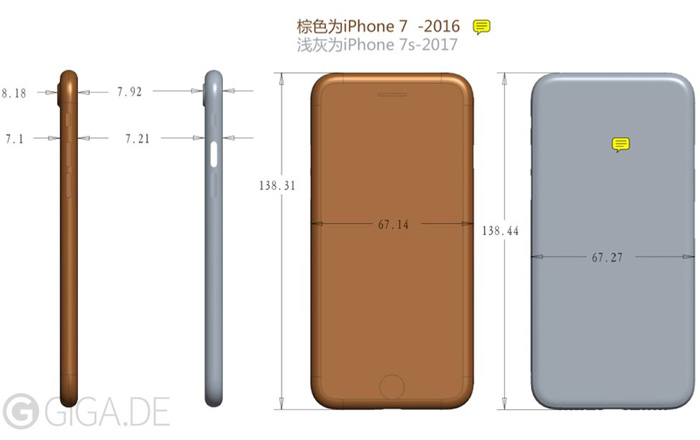 The iPhone 7s might be slightly thicker than the iPhone 7 if a new report turns out to be accurate. The culprit behind this chunkier body is the new alleged glass back layered on its back.

As per German blog Giga Apple, the iPhone 7s is set to be taller, broader and thicker. A trusted source shared a document with the publication which compared the iPhone 7 with its successor. The differences aren’t too dramatic, increasing by about 0.1mm all around.

Specifically, the iPhone 7 measures 138.31 x 67.14 x 7.1mm and the iPhone 7s measures 138.44 x 67.27 x 7.21mm in terms of dimensions. The source doesn’t directly attribute the new glass design for this growth, but it seems to be the most likely cause. The change will probably be too slight for everyday consumers to notice, but it might be an issue if they plan to use their old iPhone 7’s case.

This is a pretty routine occurrence for Apple which similarly thickened the iPhone 6s as compared to the iPhone 6. There is an upside though, as the company has apparently managed to reduce the iPhone 7’s camera bulge from 8.18mm to 7.92mm only. The component has frequently been criticized for being so prominent, so it looks like the brand may have paid heed to these complaints.

The camera’s design will probably change with the iPhone 7s. The iPhone 7’s lens melded with the aluminum surface in a curve, but that’s not likely for the new glass back. A ring would be more suitable. Plus, that’s the style seen on dummy leaks so far.