The iPhone 7 is already being hailed as the fastest smartphone ever going by various benchmark tests in the days since its launch. On the other hand, the Galaxy Note 7 is currently going through a severe backlash because of its tendency to explode.

PhoneBuff has now bravely put up a new video comparing the two in a head-to-head test. Thankfully, no smartphones caught on fire during the showdown. To recall, the same channel had previously pitted the year-old iPhone 6S against the Galaxy Note 7. The former beat the latter quite soundly by a large margin.

It should come as no surprise to anyone that the iPhone 7 too defeated the Galaxy Note 7 by an even bigger margin. Just like the earlier video, the handsets were made to go through a round where they had to open a bunch of apps one after the other and then were made to reopen all of them in the second round.

The iPhone 7 handily managed to trounce the Galaxy Note 7, finishing both courses well before the Samsung device could even finish one. Crunching some numbers, the former completed the first round in 1 minute 14 seconds and the second in 1 minute 40 seconds. By contrast, the latter got done with the first lap in 2 minutes 4 seconds and the second in 3 minutes 14 seconds.

While the test could never conclusively prove that the iPhone 7 is superior to the Galaxy Note 7, it does demonstrate that Apple’s way of tightly integrating software and hardware together has a significant benefit in terms of speed. Samsung would find it difficult to do so given the demands of Android and its own UI. 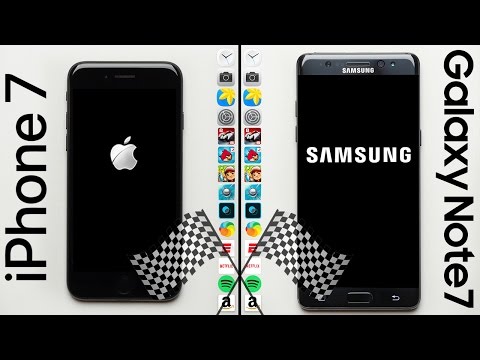