The iPhone 7 has run straight into a major controversy just days after it became officially available across the world. Some users are reporting that the smartphone makes hissing noises when under heavy load.

The unusual problem was first highlighted on September 17 by 512 Pixels’ Stephen Hackett. He says that his iPhone 7 Plus began emitting a strange sound when it was restoring from iCloud. As per his observations, the noise was coming from the back of the handset. It appeared to be originating from the CPU and became worse when the phone was under load.

Hackett asserts the issue is loud enough to be heard even if the iPhone 7 Plus is just on a table. He goes on to state that he’s heard from a number of other people with similar experiences. He also notes that there are a certain section of people who are saying that previous iOS devices have showcased the problem as well.

Hackett finally proceeded to call AppleCare regarding the sound. They decided to replace his phone. He also recorded the whining noise and put it up on YouTube (see below). It is quite loud, and some have suggested that the tune is being generated by a coil whine which takes place when components vibrate and produce a resonance that is loud enough to hear.

Smartphones usually don’t face this issue since their chipsets aren’t as heavy-duty as PC processors. However, it seems like the iPhone 7’s A10 could be powerful enough to cause a disturbance of some sort. For now, it’s too early to say whether this is a widespread issue or not. 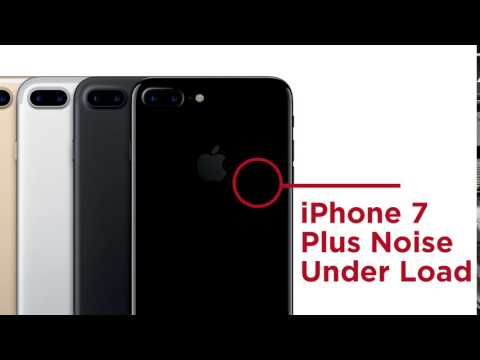