Evidence of the existence of an iPhone 7 Pro variant have just got a shot in the arm thanks to a new leak out of Japan. The detailed schematic seen below reveals a number of key details about the upcoming smartphone.

If the image turns out to be accurate, it confirms a number of rumored features about the iPhone 7 Pro which have been floating around the internet for the past few months. The photo was published in Japanese magazine Mac Fan, with the firm claiming that the handset will look similar to the iPhone 6S Plus, right down to its thickness of 7.3mm only.

The news effectively strikes down speculation that the iPhone 7 series will be thinner than its predecessor. The report goes on to confirm that the device will not carry a headphone jack. Earlier rumors had hinted that the resultant free space would be occupied by another speaker, but this is clearly not the case in the new schematic diagram. 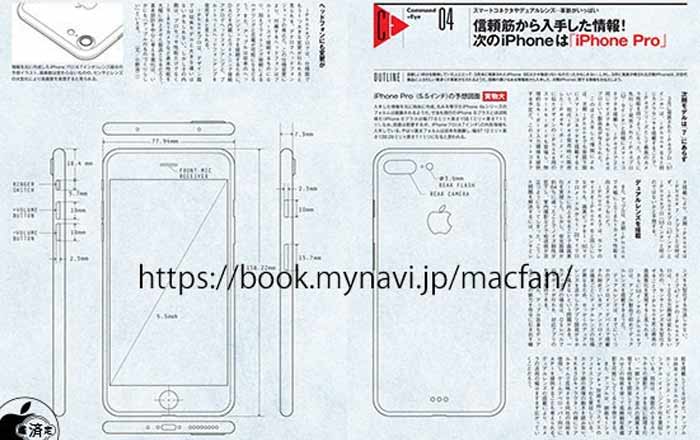 This also falls in line with Japanese blog site Mac Otakara’s earlier assertions about the iPhone 7. Another piece of information which the new leak conforms is the dual iSight cameras on the rear surface of the phone. There’s no word on what exactly the new setup will be capable of, but earlier patents had hinted at the ability to record shoot videos and photos simultaneously and switching focal lengths.

The last piece of the iPhone 7 Pro puzzle is a brand new Smart Connector. The feature can be seen in the form of 3 dots on the bottom half of the back panel. The capability could allow it to connect to external docks like Apple’s Smart Keyboard, just like the iPad Pro.