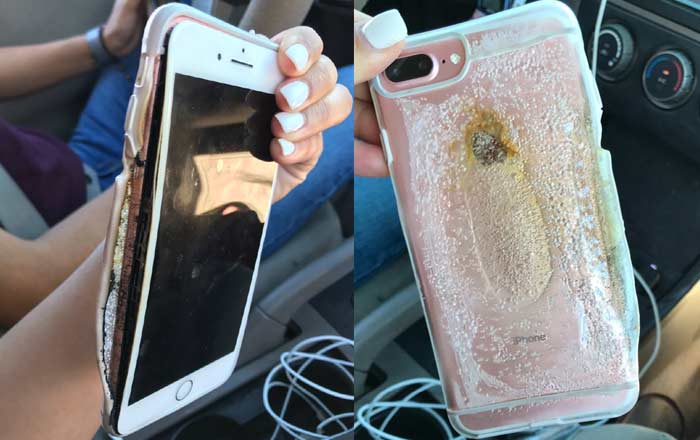 A video of an iPhone 7 Plus seen melting and smoking after bursting into flames has gone viral on Twitter. Apple is currently conducting tests on the burnt handset as part of its investigation into the matter.

The iPhone 7 Plus in question began showing signs of damage on 21 February when it refused to switch on. Its owner Brianna Olivas took it to an Apple Store where employees apparently ran tests and said there was nothing wrong. The device seemed to be fine after this.

This lasted till the next morning. Olivas claims that her iPhone 7 Plus was charging next to her head while she asleep when her boyfriend shifted it to the dresser. He then noticed that the smartphone began steaming and making a squealing noise.

The iPhone 7 Plus then proceeded to erupt into flames, forcing him to throw it into the restroom where it supposedly blew up and started emitting more smoke. This is where the video begins, with Olivas’ boyfriend recording the melting phone spitting out a thick cloud of smoke.

So my IPhone 7 plus blew up this morning was not even using it, literally no explanation for this pic.twitter.com/sQ8CJt4Y69

Olivas captured two photos of the iPhone 7 Plus at a later point of time, showcasing its burnt body and case. She handed it over to Apple who told her that it’ll let her know the results of its investigation within a week. A spokesperson for the company stated that it was aware of the video and was looking into the incident.

The footage has already been viewed millions of times on Twitter. Some speculate that the iPhone 7 Plus’ cover somehow contributed to the fire, but that can’t be verified as of now. This isn’t the first time an iPhone 7 has exploded. Previous victims of this happening include a customer in the US and another in Australia.