iPhone 7 may sport a headphone jack after all

Rumors so far have been pretty insistent that the iPhone 7 will not be carrying a headphone jack. Multiple leaks have suggested so, to the extent that it’s been accepted as common knowledge.

However, a new set of images out of China suggests otherwise, shining a ray of hope on irate fans who don’t want to lose out on the 3.5mm headphone port. The photos, uploaded on Weibo and spotted by Nowhereelse.fr, showcase the 4.7-inch iPhone 7’s inner hardware components. The innards of the iPhone 6S has been placed beside it on the right for comparison.

The two look pretty similar at first glance. The headline-grabbing feature is of course the fact that the iPhone 7 can be seen reserving space for both the headphone jack and Lightning port. Unfortunately, there’s no way to verify whether this leak is accurate or not, especially keeping in mind the overwhelming evidence against there being a 3.5mm port. 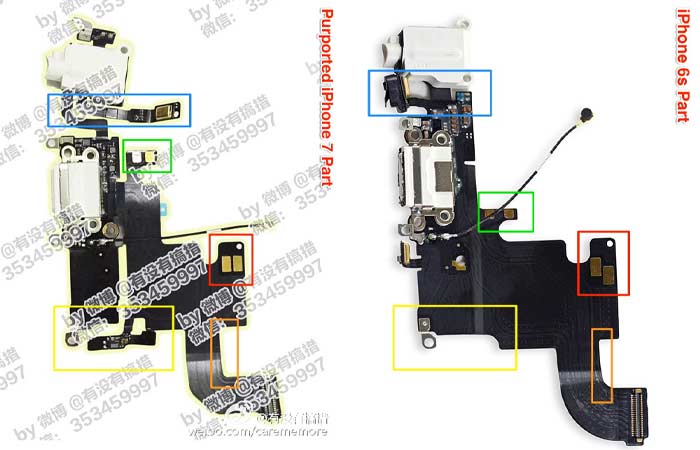 If the previous flood of speculation turns out to be true after all, Apple is most likely going to ship the iPhone 7 with a pair of Lightning-connected EarPods. It might additionally sell a separate pair of Bluetooth-ready EarPods for wireless streaming. Charging while listening to music could be an issue here, which is where the handset’s rumored Smart Connector might come in useful.

Moving on to the next bit of speculation, a new leak hints that the Apple is supplying the handset with a bigger battery capacity this time round, with a 1735mAh one for the iPhone 7 and 2810mAh for the iPhone 7 Plus. This is good news for users who’d like a bit more power than what they’re getting out of the current iPhone 6S (1715 mAh) and iPhone 6S Plus (2750 mAh).

We’ll keep you updated the moment any new evidence regarding the iPhone 7 pops up again in the future.