A fresh set of iPhone 7 image leaks have revealed some interesting new tidbits of information regarding the phone’s camera and design. It also confirms the long-standing rumor that Apple is planning on ditching the 3.5mm headphone jack.

The new photos show off the back and bottom side of the iPhone 7 and iPhone 7 Plus. Previous speculation had asserted that the former would feature a single-lens system, while the latter may go for a dual-lens one. This key difference appears to be reflected in these images.

One picture depicts space for a single lens surrounded by a thick protective ring. If accurate, this probably indicates that the iPhone 7 won’t have a flush camera flat against the side of the handset, instead opting for the standard protruding module seen in its predecessors.

It won’t all be the same though, since the camera hole is clearly bigger than previous versions of the unit. Apple may be planning to integrate a new feature which requires more real estate, such as a CMOS sensor. The brand seems to have placed the cutout far closer to the edge than earlier models, perhaps indicating an upgrade. 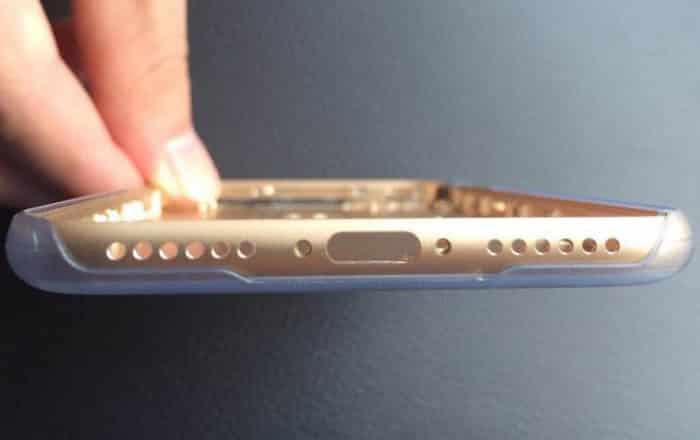 The other image which has gotten leaked is likely that of the iPhone 7 Plus. Based on the image, the smartphone’s main shooter, LED flash and secondary snapper are all in a straight line. The first and second are enclosed within a pill-shaped structure and separated by about a centimeter.

Other major revelations include the redesigned antenna bands, now placed along the top and bottom of the line instead of across the back. There’s also a photo of the base of the iPhone 7 showcasing a dual-speaker system which could be a hint towards stereo sound finally being introduced.