It’s time for you to join us on the twice-in-a-year journey of leaks, rumors and speculations that leads up to the launch of the new iPhone; the 6th generation model in this case. Images of an alleged frame of the upcoming Apple smartphone have surfaced, setting off speculations about it grabbing a thinner body and a bigger display.

The photographs come via a Chinese leaskster named CTech who has the distinction of having correctly predicted the specs of the iPhone 5S prior to its unveiling and having leaked a video showcasing a working iPhone 5C. Coming back to the iPhone 6, or the iPhone Air as it’s expected to be called, the source has contemplated that it could grab a 4.7-inch (or slightly larger than that) display. 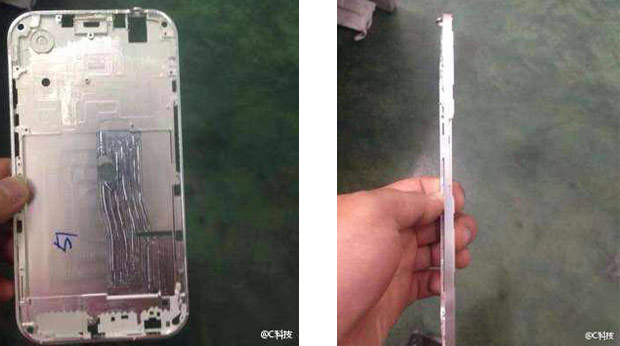 This will be a big leap over the 4-inch screen which the current-gen iPhones have been blessed with. This even supports an earlier rumor which had speculated the same screen size in November last year. The leaked images also go on to suggest a thinner body for the new Apple smartphone which is believed to be 6mm in size.

These leaks and rumors have just started coming out, and there surely isn’t any way they’re going to stop. So keep your minds ready for more details regarding to the iPhone 6 which are bound to crop up every now and then. We’ll be making sure to keep you posted about them all the time.

Update: A report on The China Post has suggested that the iPhone 6 may incorporate an 8MP camera instead of upgrading to more megapixels.