iPhone 6 with Apple logo that lights up when you get a text? Sounds cool enough alright

Your daily dose of iPhone 6 news is here with two developments worth talking about starting with the Apple logo and then the mountain of units the company has ordered. Can you believe we’re still more than a month away from the launch of the next iOS smartphone? Or should we say ‘smartphones’ in the light of ‘hard-hitting’ evidence hinting at 4.7-inch and 5.5-inch variants?

In June, we saw leaked images of what was possibly the 4.7-inch phone’s rear shell and it showed a cutout for the Apple logo. There are two theories about this – one saying that this region could house the antenna to allow better reception and the other supposing it will light up as on the MacBook.

Now images of a shiny metal back cover have surfaced via uSwitch and they seem quite legit except for one thing. But before we get to that, can you see the cutout for the company logo making its appearance yet again on the alleged rear casing of the iPhone 6? There’s little evidence to prove it at this stage, but it’s still possible that Apple may want it to look cool and light up each time you get a text message or any other notification.

The tech giant is so sure its next generation smartphones will enjoy flyaway success, Mac Rumors cites The Wall Street Journal as noting that 70 to 80 million units of the 4.7-inch and 5.5-inch handsets combined, will be produced. As for the one odd detail about the newly uncovered photos, there’s a circular cutout for the flash component. The exiting flagship iOS handset has a pill-shaped hole to fit in Apple’s TrueTone dual-LED system. 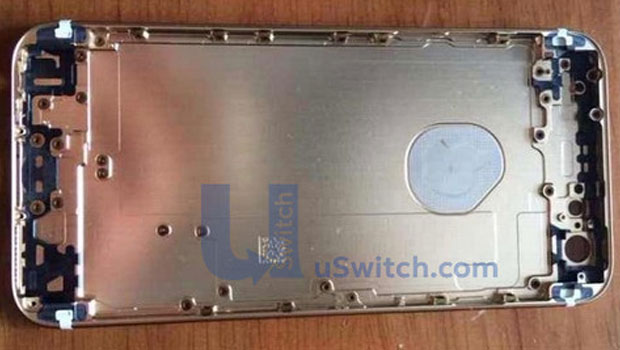 If the latest pictures are really that of the back shell of the iPhone 6, Mac Rumors thinks the company may have developed a round version of the TrueTone flash unit.