Guess what? Yet more information about the iPhone 5S has come out apart from a picture showing over a dozen iPhone 5Cs. You got that right, we’re not talking about a dozen photos of the handset, but an image of many such units being charged or put through Apple’s mandatory quality control torture tests. It’d probably be enough to drive any iPhone buff into a frenzy.

We’ve seen what is widely rumored to be the cheap iPhone in ones before, never in numbers of more than a dozen. It was pictured with the 5S and also with a Chinese popstar most recently and before that, a whole stockpile of cases for the device popped up through WeiPhone. 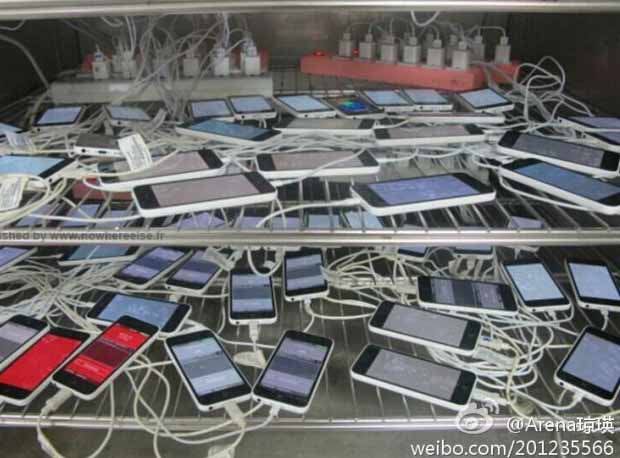 The units pictured above are clearly being put through some kind of test. This latest leak comes from Apple supplier Pegatron’s Shangai factory, says Engadget who seems to point to NoWhereElse as the first to dig up the image. The picture is said to have been sourced from a Sina Weibo account belonging to an employee at the plant.

As for the iPhone 5S, Fox News Channel’s Clayton Morris has tweeted that the upcoming handset will feature an A7 chip which is roughly 31% faster than the A6. The last mentioned is the processor that powers the current generation iPhone. But 9to5Mac has one more bit to add to the rumor apart from the speculation that dual core is on the cards here.

Sources are telling me the new iPhone's A7 chip is running at about 31% faster than A6. I’m hearing it’s very fast.

Some prototypes are supposedly being run on 64-bit chips. It’s not confirmed whether these have actually found their way into the final stage, but keep your fingers crossed for it. The post we’re referring to claims that animations and other graphics should play out much more silkily than what can be expected from present iOS devices.

If not this year, we may see the 64-bit processors in the iPhone of the future. Meanwhile, here’s a roundup of what else can be expected from the upcoming smartphone.