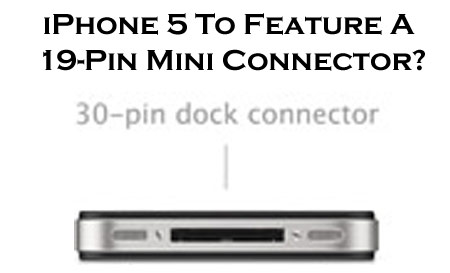 Among the many rumors and information bits that are floating around tech world, here’s one which reveals that the new iPhone 5 will reportedly sport a 19-pin mini connector. Apparently, Apple plans to do away with the 30-pin port that’s taking up space on the already existing iDevices and replace it with a 19-pin port in its upcoming handset.

This transition might come as a bit of a shock to ardent fans of the Cupertino-based company as well as iPhone accessory manufacturers. For years now, the 30-pin dock connector has been a staple in Apple products. Swirling back to the news at hand, reports suggest that the latest pictures of the supposed port resemble that of the Thunderbolt which is seen on various MacBook gadgets, as far as the size is concerned.

However, the pin-out of the upcoming iPhone 5 may just be different, according to the folks at TechCrunch who heard it from 3 independent manufacturers. Stressing on the word mini, this shift to a new port could be just another step in the company’s endeavor to save up on precious space. This piece of news may even have accessory OEMs sitting at the edge of their seat as they await official confirmation for the same.

Over the past few months, there has been a lot of gossip surrounding the iPhone 5. Many speculate that the forthcoming iDevice will house a 4-inch unibody backplate. Images showing off the front and back panels drenched in black and white hues have also made their way across the tech terrain. Other supposed tweaks include a larger display, a slimmer profile and the inclusion of the iOS 6 platform.

As of now, there are no official statements pertaining to the iPhone 5 19-pin mini connector. However, stay tuned to this space as we’ll keep you informed if any more interesting tidbits happen to crop up in the near future.