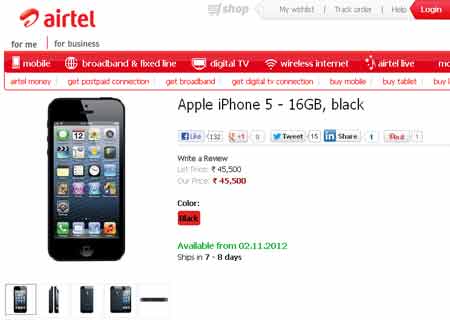 The impending launch of the iPhone 5 and its India price has been divulged through Airtel and various retailers in the country and the smartphone is even up for pre-order. The device is scheduled to be launched on November 2 and potential buyers will have to cough up Rs. 45,000 just to lay their hands on the 16GB version of the slimmest iPhone yet.

Starting off with the design, the company has dressed the handset to impress with a slim form factor which measures 7.6mm in thickness. The rear part is crafted from anodized 6000 series aluminum which is the same stuff utilized for Apple notebooks. The panel features ceramic glass and pigmented glass inlays for the white and black variants, respectively. What’s more, the device is said to be environmental-friendly, free of brominated flame retardants and polyvinyl chloride.

Moving on to the innards of Cupertino’s iPhone 5, a dual core A6 processor does all the heavy lifting. A 4-inch Retina display with a 1136 x 640p resolution portrays the iOS 6 platform. It also has a pixel density of 326ppi along with a fingerprint-resistant oleophobic coating. The 8MP rear-facing iSight camera lens is built from sapphire crystal and it isn’t likely to get scratched easily. 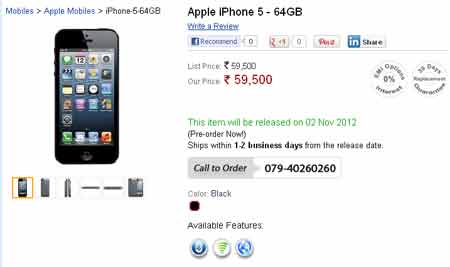 Other specifications and features include: