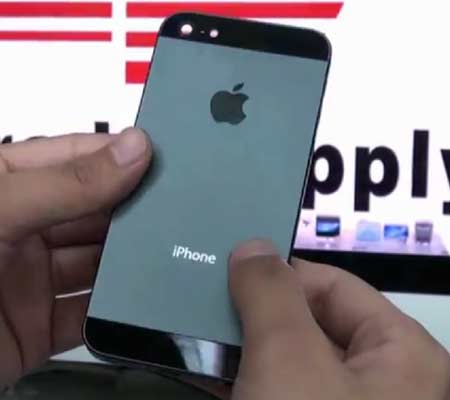 Speculation surrounding the next generation Apple phone refuses to die down and the ‘latest edition’ of iPhone 5 rumors gives us a glimpse into how its unibody backplate may look. Although the pictures had leaked out last week, the guys over at eTradeSupply have uploaded a video revealing the component in question in its full glory.

AppleInsider, who happened to come across this video on CydiaBlog, agrees that the panel in the video resembles the pictures that were leaked not long ago. Additionally, this new component clearly flaunts the Apple logo, and the ‘iPhone’ moniker is also etched on it. That leaves little doubt about its authenticity.

Furthermore, a comparison between this backplate and the iPhone 4 shows that the forthcoming Apple smartphone is likely to don a taller form factor. While the current generation iPhone sports a 3.5-inch diagonal display, the upcoming device will supposedly measure 4 inches in length. Another design alteration in the iPhone 5 is that it may completely do away with the mid plate found in the 3GS, 4 and 4S versions.

The physical appearance in terms of the button layout of the new panel resembles its predecessor’s very closely. However, the SIM card tray appears smaller than the one in the iPhone 4S which leads to the assumption that the iPhone 5 may only be compatible with nano-SIM cards. Moreover, the headphone jack along with the speaker has been moved to the lower end that is now more spacious as Apple’s proprietary charging connector seems to have been replaced by a micro dock.

Apple naturally chooses to keep mum about this unibody backplate or any other iPhone 5 features for that matter.