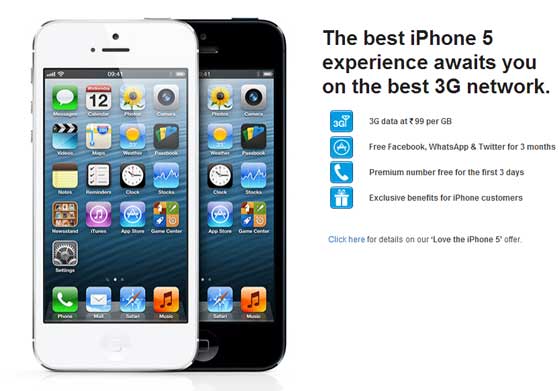 The iPhone 5 just refuses the stop grabbing the limelight in India, and as part of its latest feat, the device has teamed up with Reliance Communications to offer special 3G-based data plans aimed particularly at the product. Exclusive benefits, free usage of Facebook, WhatsApp and Twitter as well as other such perks have been brought forth by the Indian broadband and telecommunications company for the fifth generation Apple iPhone.

Interested parties can now go ahead and purchase the device through R World outlets to avail of the new plans, or they can even switch networks in order to take advantage of the schemes. Priced at Rs 304, Rs 504, Rs 804 and Rs 1,004, these plans proffer 2GB, 3GB, 6GB and 10GB data monthly, respectively. As far as the prices of the iPhone 5 being sold now by R World go, they remain the same as they were when it launched in India.

The 16GB model goes for Rs 45,500, while the 32GB and 64GB variants have been placed at Rs 52,500 and Rs 59,500. RCom is also offering premium numbers to those who’ll be purchasing the handset within the first three days of its availability. And apart from free access to Facebook, WhatsApp and Twitter for the first three months, iPhone 5 buyers will also receive some exclusive benefits from the company that haven’t been revealed as yet.

This Retina display-equipped Apple iPhone 5 comes fitted with a 4-inch touchscreen on its front surface, whereas its insides are highlighted by the A6 SoC which comprises of a 1.3GHz dual core processor, 1GB worth of RAM and a tri-core PowerVR SGX543MP4 GPU. An 8MP camera on its rear and a FaceTime HD snapper on its front make up some of its other important attributes.

The iPhone 5 version of the much popular handset is now being sold along with the above mentioned schemes via R World stores and other authorized dealers throughout India.