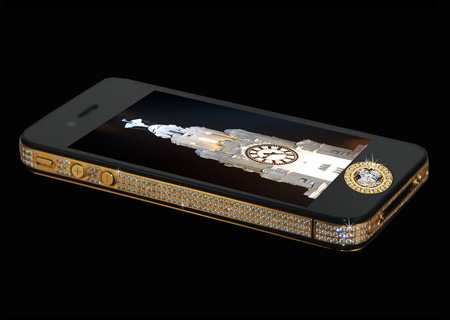 Folks with way too much moolah in their wallet have one more device to set eyes upon, in the form of the iPhone 4S Elite Gold which was unveiled recently by designer Stuart Hughes. And we literally mean just ‘one more’ since only two such models of this exclusive handset have been crafted, with the first having already been snapped up by an unnamed Australian businesswoman.

A construction cost of a whopping £6 million apparently went into crafting this piece of art. Just the bezel of this sparkly device kicks in 500 individual diamonds that are said to ultimately sum up to over 100ct. The prominent Apple logo sits regally on the rear of this iPhone in 24ct gold. In fact, the entire back of this device has been encrusted with 53 diamonds and 24ct gold.

Moreover, bits of T-Rex bone also make their way onto this device’s casket. Polished pieces of original dinosaur bone rests on this iPhone’s chest, which is made from solid platinum. Rare pieces of stones such as Opal, Pietersite, Star Sunstone, Charoite and Rutile Quartz are also hustled up by this smartphone.

Of course, techville is no stranger to such products coming out of Stuart Hughes’ stable. Last year saw several limited edition devices being doled out by the Liverpool-based designer. While the Diamond & Python BlackBerry 9700 Bold II Editions grabbed our eyeballs with their VS1 diamonds and gemstones, the gold iPad Supreme Edition was memorable too.

The limited edition Stuart Hughes iPhone 4S Elite Gold price is £6,000,000 and it comes with a 64GB memory capacity.