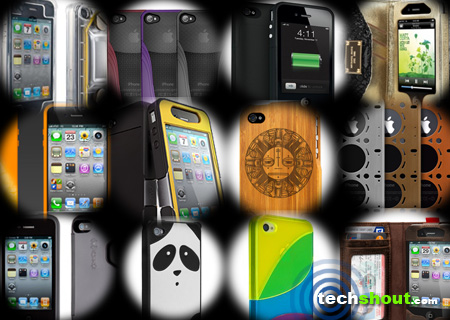 Pulling together a list of the best iPhone 4S cases is not going to be an easy task owing to the fact that Apple sold more than 4 million of their newest smartphone within less than a week. Drop that arched eyebrow of doubt, consider the number of manufacturers looking to piggyback on the success of the handset and tell us if we’re right or right. And if you’re one among the masses holding onto a new Apple smartphone or considering buying one, run through our lineup of protective layers for the device. 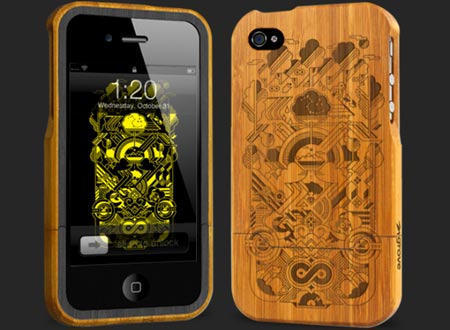 Been showing off your shiny device and its awesome Siri capabilities to just about everyone around you? Knock on wood. Take a stroll through Grove’s artist series bamboo cases for the smartphone. CNC-machined from solid blocks of bamboo, there is a variety of breathtaking, hand-carved case designs to choose from. Priced at $109, these sport equally intriguing names such as Japanesque, Mea Ola, Acid in Wonderland and more. 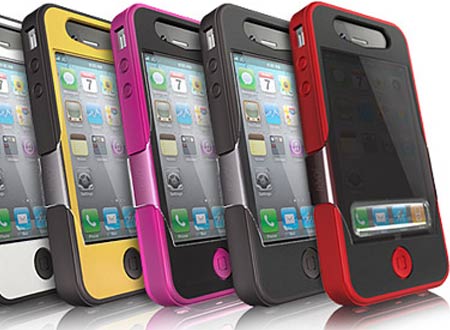 If you’re the sort who goes around inadvertently bouncing your gadgets off the floor, the walls or similar surfaces, it’s time to pick rugged protection. Offered in revo4 and revo4 SE options, the iSkin series is cut out to proffer an integrated charging port cover and even envelop the home, volume as well as power buttons. If blue or red are among your favorite colors, go for the $44.99 SE version. For yellow, pink, white and black options, it’s the plain old $39.99 variant all the way. 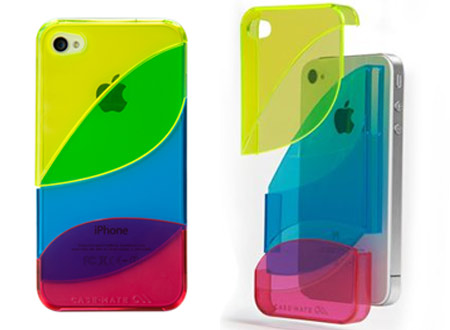 Our third option in the iPhone 4S cases lineup looks like something straight out of the sort of arts and crafts workshop you’d probably sign up for on a weekend, the Case-Mate Colorways is a 3-piece modular cover built from impact resistant plastic. So you have red, yellow and blue pieces which are meant to be interlocked according to individual taste and these primary colors overlap to deliver secondary shades, all for $30. Users can expect access to every port and if we’re not sorely mistaken, it holds together the vibrant show with a white adhesive sticker. 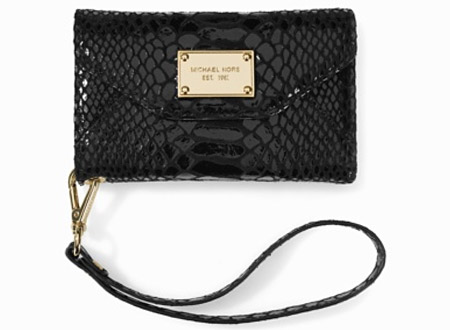 Well, bling hasn’t gone out of fashion yet. And when there’s a designer label attached to it, who’d dare to call it ‘so last season’? The Michael Kors Wallet Clutch for Apple’s smartphone looks like what its name intends to convey. Close it, and it’s a regular black designer clutch with a metal plaque just in case you have any doubts. Then pull out your glares and open it to behold the golden interior styled like a pocketbook and layered with protective leather. There are four outer color options to choose from and each will leave a £69.95-sized hole in your wallet. 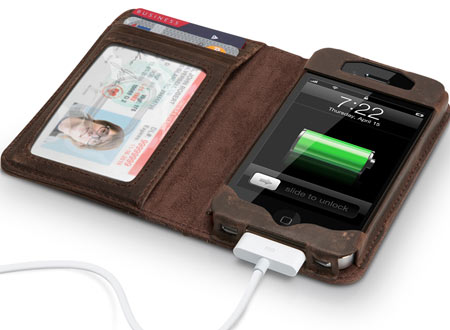 So you need a pocketbook-type case for your smartphone and fancy having it look like a little, leather-bound volume? Try Twelve South for starters. By shelling out $59.99, you can get this ‘vintage case and wallet’ for the iDevice which could actually look classier than the wallet out of which you pulled out those greenbacks. However, the designers haven’t cut out a hole for permitting users to readily snap up photos on the affixed 8MP camera. And if the cover of your BookBook won’t lie flat on the device, the good old fashioned method of sitting on it must be exchanged for some patience which you’ll need in order to watch the case ‘break in over time,’ hints Twelve South. 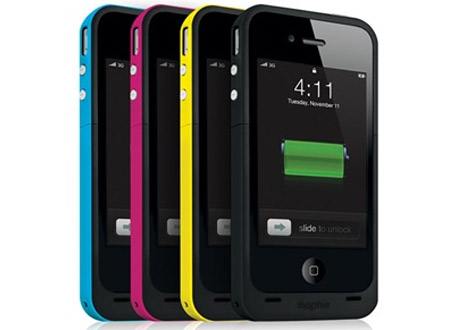 For all the power users scanning this list of iPhone 4S cases for an ideal mate, the Mophie juice pack plus happens to be smiling at you ingratiatingly while blushing a deep red. It can also do black, cyan, yellow, purple or magenta, if you please. But we’ve brought up this case mainly due to its design which apparently more than doubles the enveloped handset’s battery power. It even functions as a soft-touch case and shockproof band for your device. The manufacturer says that the cover features a battery capacity of 200mAh and it’s on sale for $69.95, at present. 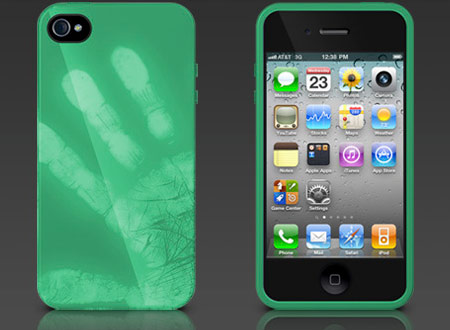 Now the Tuffwrap Shift doesn’t seem to be out yet for Apple’s latest smartphone, but XtremeMac says it’s coming soon and we’ll take their word for it. Attached to a price tag of $29.99, the shield is constructed from soft TPU material which clings to the chassis and keeps it safe from dust, dirt or scratches. It renders full access to the buttons, jacks, camera and flash on the smartphone and will land drenched in blue/white, orange/yellow, green/white, purple/blue, pink/white or gray/white color alternatives. But wait for the highlight – the case is crafted to change shades with heat activation. So the cool palm print on the rear area is possibly a convincing reason to get one of these covers. 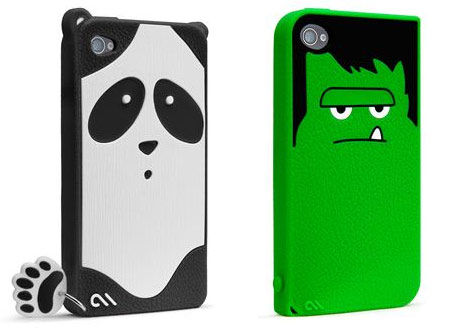 Case-Mate’s gone and done it again. It’s back in our roster with some quirky options for the 4S user on the lookout for a case. Look up ‘creatures’ on the company’s website and you’ll be able to hunt down several of these. There’s the Case-Mate Xing silicone cover as well as others dubbed Monsta, Waddler, Bubbles, Hoot, Frank and more to pick from. And the asking price is $25 for most of the candidates clustered in this category. Silicone is the material of choice running through the series and there’s access to all the ports and functions even when you’ve slipped the phone into one of these. 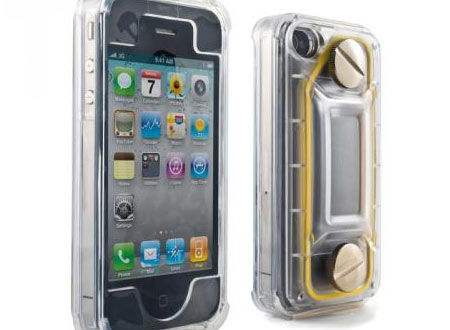 When a case calls itself an Amphibian, we’re not giving away points for guessing it’s waterproof. When you fancy a swim and some underwater photography, this $37.95 Proporta offering is here to indulge you. Just don’t tell us they didn’t warn you that the hardcover protection is good only up till 9 feet of those watery depths. So in case the deep side of the pool is any lower than that, do the smart thing and leave your handset out of the water and with a trustworthy pal. Because we’re not sure Siri is capable of screaming ‘Help, someone’s stealing me!’ 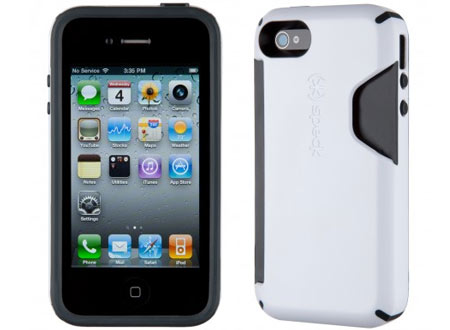 Next on our lineup of iPhone 4S cases is the $39.95, no-nonsense Speck CandyShell Card case for the Apple smartphone. It’s protective, plain and functional, period. The cover is meant to let you stash away up to three cards in the integrated rubberized slot. A handy thumb release comes into play when you want to extract the cards, though how the manufacturer expects anyone to replace a wallet or purse with this case is beyond our powers of understanding. At any rate, it’s got two layers of protection and comes in moonsuit white or nightdrive gray. But you’re out of luck if you fancy the latter hue which happens to be out of stock currently. 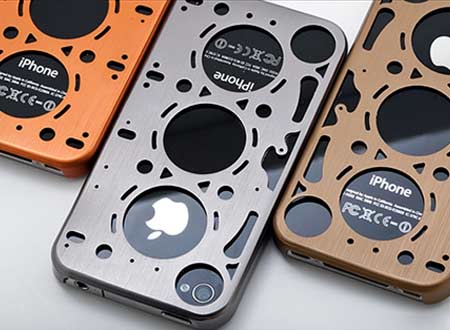 Taunting the ‘race car driver in you,’ id America has cut out an undeniably slick piece of work with the Gasket case for the Apple iDevice. It’s inspired from the shape of the head gasket on a performance engine and holds dearly to the ‘brushed aluminum’ label presented by the manufacturer. But you’ll find out that it’s not cold metal through and through, if you take a look at the innards which are lined with suede for guarding the body from bumps and scratches. Whether aluminum silver, vintage gold, titanium gray, jet black or rally blue is your color, you’ll still have to cough up $29.95 for it.

While we’re still on the subject of sports cars, the solo vu from iSkin is yet another case which tries to arouse similar sentiments as the id America cover. This wrapping has a clear shield safeguarding the rear panel and a ‘clever port cover’ sealing off the 30-pin connector on the smartphone’s base, from moisture and other harmful elements. In addition to all this care, the skin also proffers a molded ring around the camera and flash region for preventing the flash glare from getting in the way of memories. And it’s all yours for $39.99 after you pick from the onyx, merlot and velvet color choices.

There you have it; if the 12 best iPhone 4S cases aren’t enough to make you feel spoiled for choice, we’ve missed out on some. So don’t forget to tell us about them.