iPad dominates 94.64% of all tablet web traffic, so much for Flash support on Android 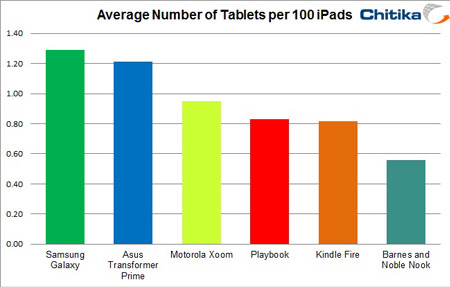 Reports about the new iPad achieving sales of 3 million in a span of a few days comes as no surprise, so does the Chitika one about the iPad holding 94.64% of all tablet web traffic. Well, this means that the competition, or let’s call it Android-powered slates, would account for a little over 3% of internet usage within the specified category.

While the iPad stands with 94.64% of web traffic amongst tablets, the closest reached by any of the competitors amounts to 1.22%, which was apparently achieved by the Samsung Galaxy series. Following in behind the South Korea-based manufacturer is the Asus Transformer Prime that tips the scale with a claim of a little over 1.20%, while the Barnes & Noble Nook acquires the last position at under 0.60%. Slates such as the Motorola Xoom, the BlackBerry Playbook and the Kindle Fire position themselves between the 0.80% and 1% marks.

In a recent report by comScore, the Amazon Kindle accounted for 54.4% of the tablet market in the month of February. Well, that didn’t come as a surprise too, taking into consideration the high sales figure the company achieved during the past holiday season. But in spite of the rapid growth of Android slates and the ‘millions of sales‘ most manufacturers have achieved, the report states that even with $962 million worth unit sales in 6 South East Asian countries, Google’s mobile platform still appears to be outnumbered by the iPad.

Making assumptions on whether the iPad can continue on maintaining its lead in the overall tablet web traffic share would be a rather tough job. It’s like they say, ‘What happens next, only the future can tell.’