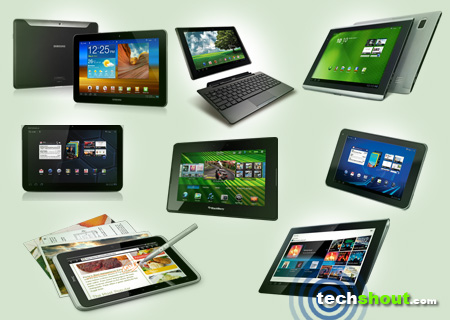 Not everyone’s likely to be a fan of the Apple tablet and that’s mainly why we’ve got together a list of the 8 best iPad alternatives. If you run through the roster, some of these tablets come with capabilities that Cupertino may not really have bothered dropping into their iOS slab. So if you’re anxious to know the stars that hold the ability to give the iPad a run for its money, you’ve come to the right place. 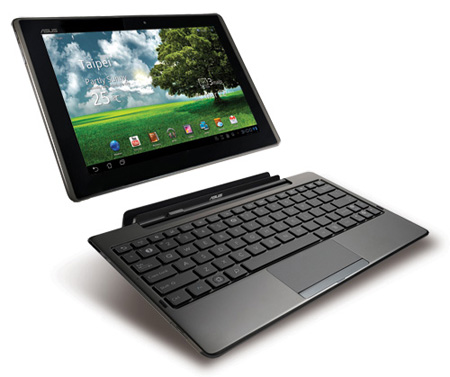 First to feature on our list of iPad alternatives is the Asus Eee Pad Transformer TF101 tablet. One of the main drawbacks of many new devices is the constant need for recharging due to high power consumption. But, when it comes to the Transformer TF101, you could go for 16 hours straight on a single charge, that’s with the help of the keyboard mobile dock. Additionally, with the 24.4Wh Li-polymer battery, the tablet can deliver around 9.5 hours of activity time. For entertainment, it sports a 5MP rear-facing camera, SRS Premium Sound, a microSD card slot and a mini HDMI port. The gadget is powered by the Nvidia Tegra 2 processor, with 1GB of RAM and runs on the Android 3.2 OS. 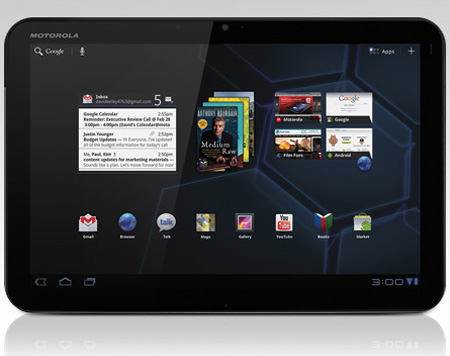 Hosting five fully customizable homescreens on the Android 3.1 OS, the Motorola Xoom tablet comes with a 1GHz dual core processor and 1GB RAM. It incorporates a lot of features can be found on the iPad. On the front, you can espy a 10.1-inch WXGA HD 720p display as well as a 2MP front-facing camera for video chatting. 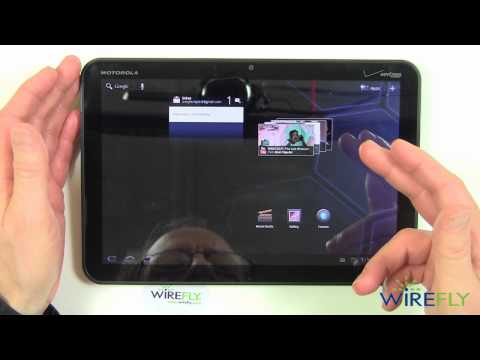 To keep yourself entertained, there’s a 5MP rear-facing camera with dual LED flash, HDMI connectivity, a 3.5mm audio jack and 720p video playback. Its memory options include up to 32GB onboard and 32GB extra space via an SD card. You can also watch around 10 hours of your favorite movies through the 24W-hr battery on a single charge. 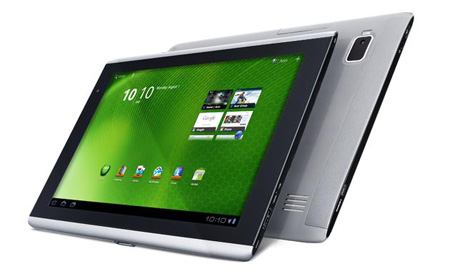 Next in our lineup of iPad alternatives comes packed with a 10.1-inch TFT WXGA touchscreen which portrays resolution of 1280 x 800p, the Acer Iconia Tab A500 lets you watch 720p HD videos in a 16:10 aspect ratio. And to bring in an added benefit, it even accommodates the Adobe Flash player. Also, with the Nvidia Tegra 2 processor and the integrated GeForce GPU, the device lets you get your game on with console quality graphics. To provide you an extended entertainment experience, you can hook it onto any HDTV via HDMI or wirelessly stream content to an external display with the DLNA compliance. Power-wise, you can expect around 10 hours of Wi-Fi web browsing from the 3,260mAh Li-polymer battery. 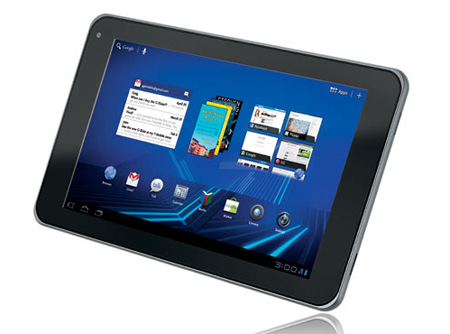 Hosting a rear-facing 5MP camera with LED Flash and 1080p HD as well as 3D video capture, the LG G-Slate is most likely to keep you entertained for a long time. If you desire immersive gaming, the tablet comes powered by the 1GHz Nvidia Tegra 2 T250 SOC and an 8.9-inch full HD widescreen, 3D multi-touch display. Additionally, with the Android 3.0 platform and Google services, the tablet is aimed towards providing you an enriched multimedia experience. What’s more, being 4G capable, you can look for to high speed internet without depending on a Wi-Fi connection for browsing needs. It comes with a 6,400mAh battery, 32GB built-in memory and 1GB of RAM. 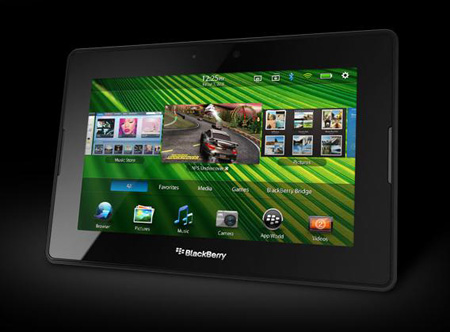 RIM too has taken a bite out of the tablet market with its own BlackBerry PlayBook. Well, you could call it the odd one out as it comes powered by the BlackBerry Tablet OS as opposed to the rest of the ‘Androidites’. What brings this tablet on our iPad alternatives roster is it’s adequate offerings in almost every field. For performance there’s a 1GHz dual core processor and for better multitasking, 1GB of RAM. 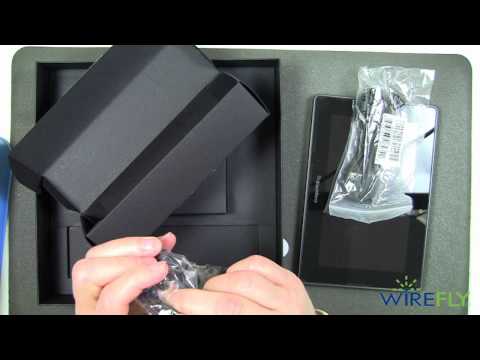 And not to forget the BlackBerry smartphone apps that are optimized to run on the 7-inch high resolution multi-touch display. There’s also an HDMI port if you ever need to display your full HD videos captured from the rear-facing 5MP camera on the big screen. What’s more, it supports the Adobe Flash player for viewing flash-based content online too.

Price: Starting at $199 for limited time only through participating retailers 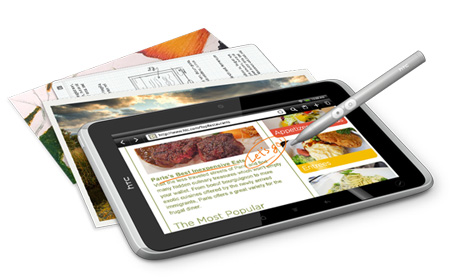 It may not be as big as the iPad, but when it comes to features, the HTC Flyer has a handful of exciting specs. Firstly, there’s a 7-inch touch-sensitive screen which displays a resolution of 1024 x 600p and the Android OS with a layer of the HTC Sense UI over it. For snapping up images, the tablet sports a 5MP rear-facing camera with auto focus as well as a 1.3MP front facing one for video calling. 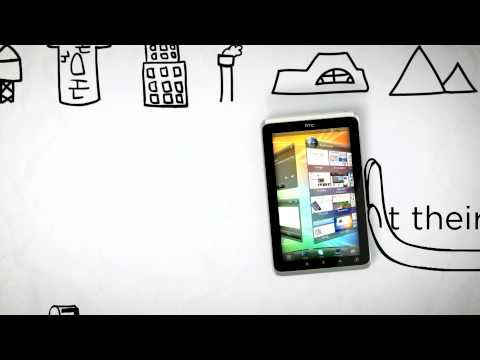 You can store your favorite movies, videos, images, music and apps on the 32GB onboard memory. And if it ever falls short, there’s a microSD slot to pack in some more storage. Lastly, through the 4000mAh battery, you can receive up to 8 hours of activity life in video playback or 6.5 hours in web browsing. 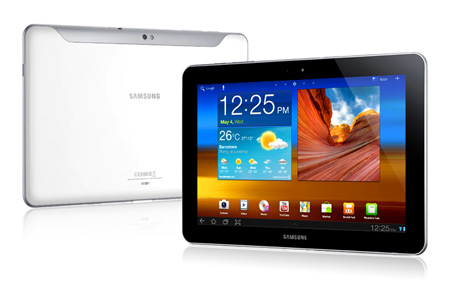 Featuring advanced multitasking capabilities, the Samsung Galaxy Tab 10.1 comes with a Mini Apps Tray that allows you to access some of the commonly used features simultaneously over other applications. You can watch high definition content through the 10.1-inch HD 1280 x 800p resolution WXGA display. Furthermore, the tablet is powered by the Nvidia Tegra 2 processor, 1GB RAM and the Android 3.1 OS. Other features include a 3MP rear-facing HD camera, HSPA + network support and options of 16GB, 32GB or 64GB of built-in storage. Also, battery durability reads at around 9 hours of video and up to 72 hours of music playback. 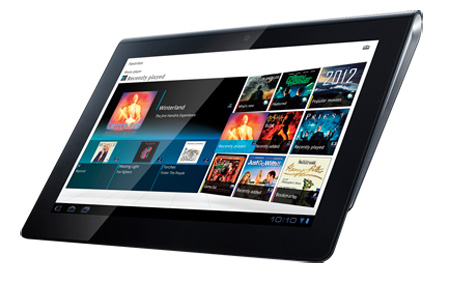 The Sony Tablet S may not have all the features that the aforesaid tablets possess, but one element that gives it an interesting appeal is the IR remote control function. Also sporting the Nvidia Tegra 2 SOC with 1GB of RAM, you can expect around 8 hours of activity time through the Li-ion 5000mAh battery. For viewing pleasure, there’s a 9.4-inch capacitive touch display with a resolution of 1280 x 800p and a rear-facing 5MP camera for video recording as well as image capture. What’s more, there’s also a full-size SD card slot for dealing with content.

If you’re still going to ask how these best iPad alternatives are comparable to Apple’s tablet, you’d probably have to go hands on with one and draw your own conclusions. And don’t forget to tell us about it.