iPad Air Plus is a huge tablet that’s on the horizon, details leak online

The iPad Air Plus has been in the rumor mills for far too long now, and we finally have some reliable details about it to have a look at. This upcoming tablet with a massive screen size of 12.2 inches has had a few of its specs leaked out into the open, giving us a glimpse at what we can expect from the apparent Apple product.

The iPad Air Plus will fall somewhere between in the Air 2 tablet and the MacBook Air family in the repertoire of products offered by the company. There’s hence a possibility that the company may merge the lightweight laptop range with the top-end MacBook Pro lineup to make way for the large tablet that should definitely come with a keyboard attachment. 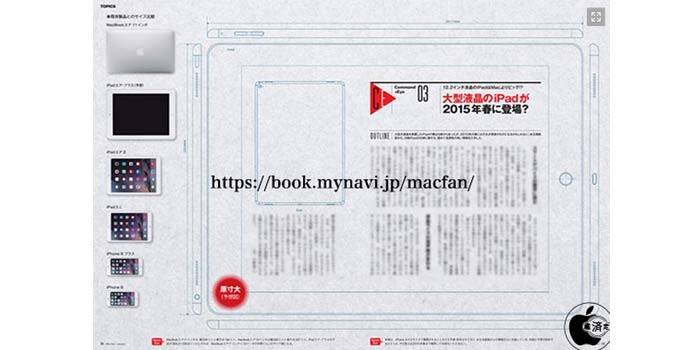 As revealed by Macotakara, a Japanese magazine named Mac Fan has showcased what it believes to be a full-scale blueprint of the 12.2-inch iPad in its January issue. This slate purportedly measures 305.31mm x 220.8mm x 7mm which translates to 12 x 8.7 x 0.28 inches.

It will be powered by an advanced mobile-grade processor named A9. While other details haven’t been disclosed, it can be noted that the iPad Air 2 which is available right now grabs a 9.7-inch display onboard. It’s lightweight and slim, and the 12.2-inch model is also expected to bear these properties owing to the fact that it has the word Air in its name.

The spring of next year is when Apple is allegedly planning to introduce the new iPad Air Plus with its 12.2-inch display. Let us now wait for more details about it to trickle out into the open.