iPad 3 to step under the spotlight on March 7 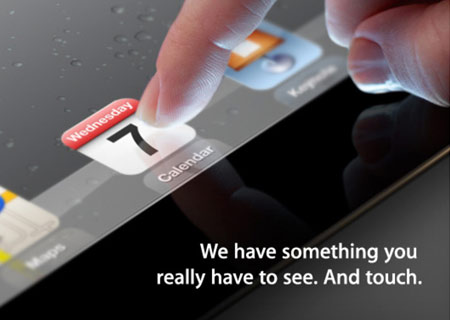 Most speculations may have landed on the right track this time as the Apple iPad 3 or whatever Cupertino plans on calling it, will finally make an appearance next week. The new generation tablet is expected to be unveiled at an event that’s pegged for March 7 according to official invites sent out by the company.

10a.m. PST at the Yerba Buena Center for the Arts in San Francisco is the designated time and place where the event will be held. And Apple has already started sending out invites, reports The Verge. We’re mostly hoping that the swarm of rumors flooding the internet can finally be put to rest. But since no official word on the specs has surfaced as yet, it’s still safe to make presumptions.

Cupertino’s next generation tablet should stick to the conventional design adopted by the iPad and iPad 2. Well, a slimmer form factor could do some good here. Aesthetics might not seem to be Apple’s main focus, but high-end specs are most likely to cover up the possible loss. A beefed up processor, presumably the quad core A6 SOC, an improved Retina display with an enhanced resolution of 2,048 x 1,536 pixels and better graphics are the main aspects anticipated to feature on this device. 4G LTE connectivity could be in the offerings as well.

The Apple iPad 3 release date and price details are expected to surface at the time of the tablet’s launch, that’s March 7 at the Yerba Buena Center for the Arts in San Francisco, for reminder’s sake.