iPad 3 is a no go, iPad HD is what they’re calling it 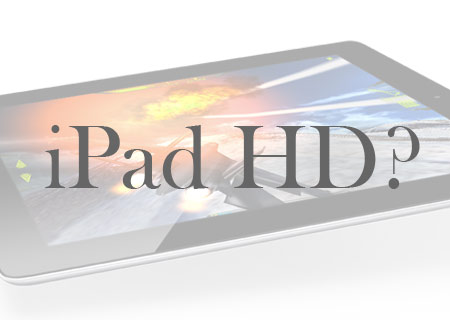 With just a day left for Apple to officially unveil its next generation tablet, speculations are blazing out stating that the highly anticipated iPad 3 is most likely to debut bearing the iPad HD moniker. So what made Cupertino move astray from its conventional naming scheme? Well, blame that on the 2,048 x 1,536 pixel display it’s speculated to house.

The change in identity was already mentioned by various sources over the past few months. Gizmodo along with the guys over at The Verge, have already highlighted the naming possibility. And now VentureBeat has also hopped onto the bandwagon, which does create a higher chance that Apple could announce the HD instead of an iPad 3, this Wednesday.

Besides its name, the next generation iPad is also said to have a change in heart. Although many previous rumors pinned down the possibility of the A6 SOC powering up the tablet, this report states that an improved variant of the dual core A5 processor, the A5X, is most likely to take charge, instead of the aforementioned quad core chip. What’s more, Apple seems to be shelling out cash for 7.1-inch screen components. Could this mean that a smaller iPad variant is in the works, or the iPad Mini as some might call it?

So to round everything up, the upcoming tablet from Cupertino should come bundled with a 9.7-inch retina display that supports full HD playback capabilities and a beefier dual core processor instead of the quad core A6 for improved performance. Well, that’s all we can cook up for now. Plus, 24 hours isn’t much of a wait anyway.

The iPad 3 or the iPad HD will be officially unveiled at the Yerba Buena Center for the Arts in San Francisco tomorrow.