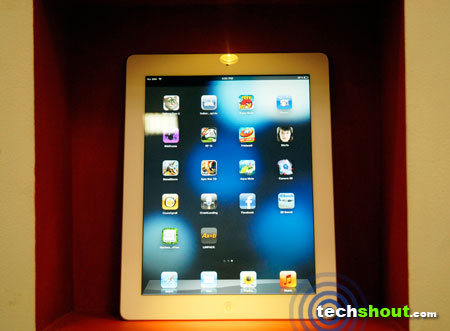 It was on March 7 that Apple announced the new iPad 2012, and now the first ever tablet to feature an FHD display has made its way to our review lab. We’re more than eager to experience the fresh features the guys over at Cupertino have incorporated within this sleek beast, firsthand. Are they worth the $200 price bump? You get the similar looking 9.7-inch slate wrapped within a form factor that’s identical to its predecessor, with the benefits of the A5X SOC, a 5MP iSight camera and the Retina display, of course. Basically, it’s sort of an iPhone 4, 4S story all over again. Well, it’s time we moved on to see what this ‘revolutionary’ slab can do. So read on if you’re eager to find out as well. 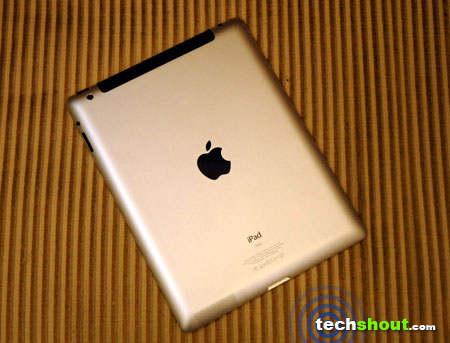 The new iPad 2012, just as its predecessor, arrived in the same old white cardboard box design. To be honest, we were kind of disappointed with Apple’s not-so-advertising approach to the packaging. There was no ‘Revolutionary iPad’ or ‘Stunning Retina display’ printed on the top, but just a picture of the slate. At first, it got us thinking that they sent over the wrong device. That was rectified once we spotted the Wi-Fi/4G labeling on the rear. But Apple did take care to throw in a couple of goodies that cheered us up the moment we saw them. A digital AV adapter along with an HDMI cable for video output was accompanied by a Smart Cover and a camera connection kit which comprises of two adapters, one for USB enabled snappers and the second for accessing content stored on an SD card. 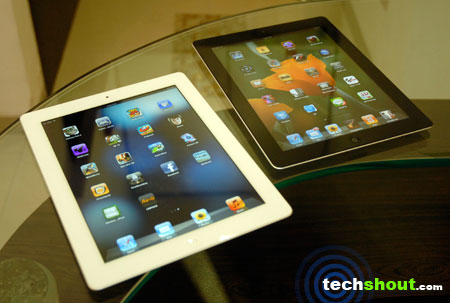 We’ve said this before and now we’re saying it again – there’s nothing ‘new’ about the new iPad in terms of appearance. The rear camera is a tad larger, but that’s about it. A few minutes of playing spot the difference and you’re bound to end up in sheer disappointment. While most manufacturers try to cut down the size and weight of their devices, Apple has apparently thrown in a bit more for its current 9.7-inch slate. At 1.46 pounds, the slate is heavier than its previous generation sibling, but measures the same in terms of dimensions; that’s 9.50 x 7.31 x 0.37 inches. For a quick roundup, the home button sits pretty just below the display, while the FaceTime camera has earned its spot above the screen yet again. The aluminum-crafted rear panel encompasses the loudspeaker, dock connector and primary camera, while the volume rockers and micro-SIM tray are allocated to the sides. 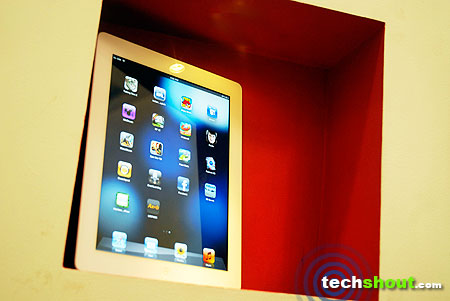 So what if the new iPad 2012 doesn’t look different? People still buy the MacBook Air in spite of it retaining somewhat of the same form factor as compared to older versions. Apple has delivered plenty to drool over in its latest tablet. It may not be directly visible, but we’re hoping the experience each new feature offers can create a distinct identity for the device and maybe, just enough for potential buyers to overlook the design aspect. First up is the Retina display which proffers resolutions of 2048 x 1536 pixels at a density of 264ppi, giving the device its ‘world’s first FHD tablet’ title. Apart from the display, the bumped up processor is the next highlighted feature within the slate which sparked a few controversies.

Asus replied to Apple’s claims of its tablet being 4 times faster than Tegra 3 through a Twitter update – It read something like this ‘New Apple iPad‬ to have a quad-core GPU. Darn! The ASUS Transformer’s GPU is only 12-cores.’ The SOC that led this war is none other than the A5X, a dual core ARM Cortex A9 CPU based on the ARM v7 architecture. If this wasn’t enough, Apple initially took the privilege of promoting its 9.7-inch slate worldwide with 4G LTE capabilities, despite the fact that the network band is only supported by carriers based in the US. The rear-facing 5MP iSight camera is the next improvement Cupertino has rolled out, proffering 1080p video captures and AF. Where hoarding needs arise, you options stand at 16GB, 32GB and 64GB. 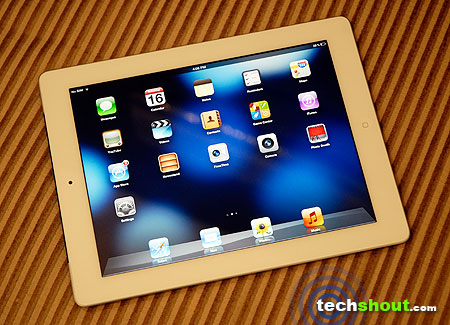 Ok, so let’s talk performance. While Apple has retained the appearance of the device, we’re hoping the tablet’s capable of delivering the same experience we got with the iPad 2. In a comparison test between the second and third generation slates, the new iPad 2012 boots up quicker than its predecessor, an average of 6 to 7 second faster if precision matters. HD video playback and high resolution images appear bright and vivid on both devices. However, the new kid from Cupertino really knows how put on a display of crisp and clear visuals. You’ll surely be going around boasting about the new Retina display. But images captured from the iSight camera aren’t really worthy enough to be displayed on such a beautiful screen.

Grainy, washed up and dull captures left us highly disappointed. And don’t get us started on the FHD video recording. Apart from smooth navigation throughout the interface, previewing 1080p content on the slate is truly delightful, an experience that no tablet we’ve reviewed till date is capable of providing. From multitasking to gaming, it’s all a lag-free journey. And as always, browsing the internet on an iPad couldn’t get any better. At the end of all our tests and fiddling around, we were left with around 40% of remaining power. You can expect it to deliver 9 hours of battery life on a single charge.

The slate is noticeably quicker than its predecessor. And with iOS 6 in the pipeline, it’ll even have a go at Siri.

Seriously, why would anyone out there want to ‘kill’ something as brilliant as the Retina display?

4G LTE is only supported by US-based networks such as AT&T and Verizon.

The images captured through the rear camera appear dull and grainy.

There’s nothing ‘new’ about the new iPad, at least from the outside.

To round things up, it really disappoints us knowing that Apple only bumped up a few specs after a year. However, the Retina display really makes things worthwhile on the iPad 2012. And taking it all into consideration, we’ve giving this slate an 8.9 out of 10 rating. You can pick up the slab for a starting price of $499 in the US or Rs. 30,500 in India.