iOS7: Should you update or not? Also, do you really need the iPhone 5S?

With the final version of iOS 7 seeding to iDevices, the question is should you update to the latest platform? If you own an iPhone 5, we’d strongly suggest that you get the new firmware as it brings almost every new feature to last year’s flagship. This also suggests that you should think twice before picking up the newly launched 5S.

iOS 7 is the same for both devices

As we’ve mentioned above, the new platform introduces most of the latest features on last year’s flagship. iOS 7 sports an all-new design, making the UI more colorful and attractive than before. The company has added a new element dubbed Control Centre which allows you to conveniently access frequently used options with a single swipe instead of the taking on the hassle of navigating through the Settings menu. 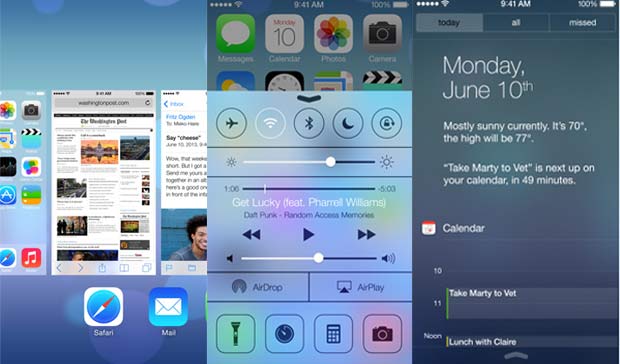 By simply swiping up from any screen, a UI lets you enable or disable Airplane mode, Wi-Fi, Bluetooth and Do Not Disturb, adjust the brightness, lock the screen’s orientation and access tools such as torch, timer, calculator and camera. You will also be able to control music playback. Additionally, the company has added gesture support for its own applications where you can go back to the previous menu or tab by simply swiping from the left side to the right.

Differences between the iPhone 5 and 5S

There’s not much new in the iPhone 5S. It features the same design as its predecessor (dimensions and weight included). What’s better in the latest flagship is that the battery capacity has been increased, the camera beefed up, still 8MP, but with dual LED flash, and there’s an all-new processor. Dubbed A7, the SOC is a 64-bit chip which is said to possess 40 times faster processing power and 56 times better graphics than the silicon found in the original iPhone. Also, iOS 7 has been optimized for the new CPU. Then there’s Touch ID fingerprint recognition which has issues of its own.

The bottom line here is that the overall iOS 7 experience will be the same on the iPhone 5. We’d rather update to the latest firmware than shell out a lump sum of cash for a new model that isn’t quite worth the upgrade.