This iOS date bug can brick your iPhone permanently

There’s a new iOS bug going around that instantly bricks an Apple device through a simple date and time change. All a user has to do is set their gadget’s date to 1 January 1970 and watch as it fails to boot up after that.

This unusual date bug seems to be affecting a lot of iPhone owners with several reports of it happening popping up on the internet recently. As far as Apple problems go, it doesn’t quite reach the heights of the brand’s notorious Error 53 warning since there aren’t a lot of scenarios where a person would need to set their device to 1 January 1970.

Still, the surfacing of the issue should at least serve to prevent people from experimenting with their iPhone and bricking it forever. To activate it, an individual would have to head to Settings, General, Date & Time and disable the Set Automatically option. They then have to roll the date to 2000, after which they have to exit the screen, go back and repeat the procedure till they hit 1970.

Finally, the user has to switch off their device and then switch it on. Instead of doing so, the screen will stay stuck on the Apple logo. There’s no way to recover the iPhone after this, with a Reddit thread claiming neither a DFU restore or Recovery mode will work. The only way forward is to book an appointment at a Genius store.

Also See: Get ready for a hot pink iPhone 5se

Some people claim that they had gotten a free replacement. Others say removing the battery fixes the bug, though it’s not recommended since it voids the phone’s warranty. Another set of people had claimed the issue resolved itself within a few hours. Note that the problem affects any iOS device using a 64-bit A7, A8, A8X, A9 and A9X processor. 32-bit ones are immune to it.

Apple has not commented on the issue yet. A Reddit user posits that the date bug is the result of time zones. Setting the date to 1 January 1970 seems to trigger the iPhone’s internal clock to reach a number lower than zero. This discrepancy apparently confuses the handset and crashes it. 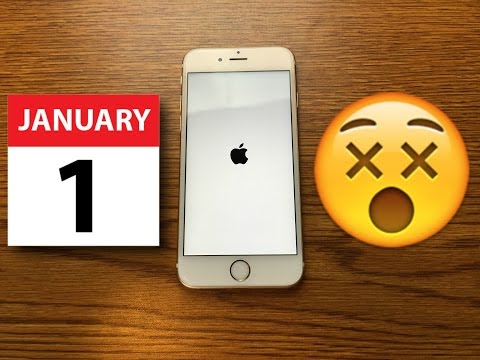